Somewhere on the internet I saw a review of this book, I guess it was about two years ago. Back then I was a little bit into rum, so I thought it would be wise to gather some knowledge on it. Now I’m not saying I’m not into rum anymore, but I just don’t have a clue what’s what and I don’t want to spend money outside my whisky budget on stuff that might not be all that!

Anyway, rum is a spirit from the Caribbean, based on molasses or sugar cane. I think everybody knows that. Most of the crap whisky from India (not the single malts, mind!) is technically rum too, but that’s another story. 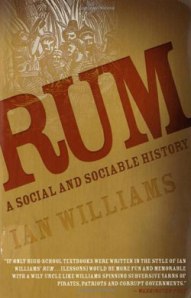 What I do know from the rum tasting I’ve been to in Krommenie, some years ago, is that rum doesn’t really have a big set of rules regarding to what kind of production methods, aging and labeling there has to be. Ages are generally an average, or just a number (Ron Zacapa 23, for example, is made of rums ranging from 6 to 23 years old).

This book doesn’t really go into detail on the production process. Of course, there are some pages spent on it, but it’s never too technical or matter-of-factly, mostly because there are so many variables. What also doesn’t help is that the producing region is split over some 30+ tiny countries.

The history of rum is what this book mostly is about. It tells the tale of the original colonization of the Caribbean, the slave trade that rum allowed to be set up, all the way to all the wars between England and France, the American War for Independence to Prohibition. These chapters start of very interestingly written, with quite a lot of wit in them which makes for an easy read. After about 70 or so pages is does get rather tedious.

I guess this is not entirely fair since I just finished reading “A Renegade History of the United States“, which covers a lot of the same data, but just from another angle. The contents were rather similar, and in both cases there were too many pages spent on this. I got bored.

Luckily, the last 100 pages or so are far more interesting when the chapters get shorter and modern history regarding rum is described. It takes in the last century or so, starting with prohibition, to the Cuban revolution and how a country like Haiti has nothing set up properly except for a hotel and a distillery.

All in all it’s a very interesting read, and if you don’t know much about rum I certainly recommend it, but do keep in mind that so many pages spent on the back and forth in the Spanish Main and all other colonies in the Caribbean does get a bit ‘long’ after a while. It’s a very good read and Ian Williams is a very good writer.

What I also like, by the way, is that he is not shy of giving his opinion, especially on the more contemporary chapters of the book. He doesn’t shy away of talking crap about Bacardi, and the way they lobbied their way into almost every spot of the world, while pushing rum producers (that actually make tasty rum) out.

I'm very interested in booze, with a focus on whisky. I like to listen to loads of music and play lots of Magic: the Gathering, and board games too. I'm married to Anneke, have two daughters Ot and Cato, a son Moos and a cat called Kikker (which means Frog, in Dutch). I live in Krommenie, The Netherlands.
View all posts by Sjoerd de Haan-Kramer →
This entry was posted in - Book and tagged Book review, Books, Ian Williams, Rum. Bookmark the permalink.