Last year I went to Scotland on holiday. We visited BenRiach distillery, which is a truly great place for any whisky lover. Of course, there were some samples tasted and in this case they came straight from random casks in the warehouse. For some reason I didn’t get around to trying them until last night.

I find myself trying to pick a favorite distillery rather often. Of course, I can’t make up my mind as it somehow feels like something definite, instead of a semi random pick from a bunch of places I’ve visited. What I just realized, however, is that I have a couple of distilleries that I keep liking more and more. Those are Springbank, Bowmore and BenRiach (and to some degree, Highland Park).

Of those three, I visited all of them. I did extensive tours of all of them and there were interesting tastings involved too. I like those because of the distilleries themselves. Part of the ‘huh, that’s interesting’ moment regarding this wee list is that all those three distilleries do all parts of the process themselves. As in, they also have an active malting floor which produces at least some of their malt. An interesting realization and something to explore further.

Anyway, the cask samples. I don’t have too much information on them since I didn’t write too much down at the time. I know they’re fairly young, but the year on the cask can be both the year of distilling or the year they were put into this particular cask. And I don’t know if they’re finishes or not. And I don’t know the ABV. What I do know is that I’m going to keep my eye out for the Virgin Oak one. 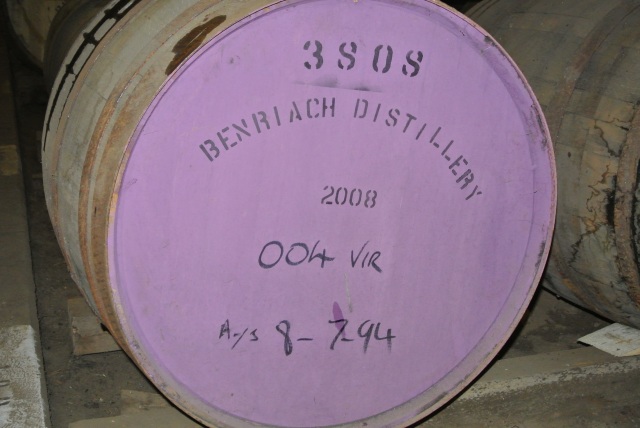 Sniff:
Scents of heavy leather and lots of good quality fresh oak come off the glass right after pouring. There’s sherry, strangely, and a certain spiciness that I did not expect. Plums, raisins and some bitter woodiness. Sponge cake with some custard, and I would have sworn sherry trifle.

Sip:
The palate is rather sharp with quite a bit of alcohol and lots of fruit. It’s dry with a lot of oak again. Also roasted barley, like used in stouts, dark chocolate and espresso with its bitterness.

Swallow:
Oak, fruit and quite sharp. It mellows quickly to show a more syrupy fruitiness of raisins, plums and dates.

This is a strange whisky. I know which cask it came from, and I know it’s a virgin oak barrel. It might be a virgin oak finish and have been in a sherry cask before. That would explain a lot since I would have sworn this to be a sherry cask. The richness, and fruitiness were very much in line with that.

Regardless of what this cask is or is not, this whisky is bloody well delicious. 3808 is a number I’m going to keep my eyes out for since I really want a few bottles of it. Let’s say one to drink, one to keep and, well, another one to drink too.

Since the year on the cask is 2011, I’m taking a guess that this is a finish and the whisky inside is slightly older than two (by now three) years.

Sniff:
This is very gentle, and very fruity. Juicy peaches, and sugary grapes. It’s rather light in style for a PX. Some rock melon, mango. Rather timid but oh so fruity!

Sip:
The palate is gentle and syrupy sweet again, with lemon drizzle sponge cake. A hint of pepper with some sweet oak. Peaches with a slightly bitter hint of its stone. Mango, fruit syrup from a tin, wine gums. It takes a while to open up on the palate but becomes increasingly gorgeous.

Swallow:
The finish is unexpectedly different. Oak and wine gums still, but the fruit is more of a tinned red fruit kind. Strawberries, blackberries, that kind of stuff. It’s gently but it lasts quite a while.

Very different but very fruity too. A different beast than the Virgin Oak but not less gorgeous. It’s surprisingly gentle and light, and it reminds me a bit of the Auchentoshan Solera that came out a couple of years ago. There’s a lot going on and a lot to discover, although it’s all in the range of fruit. So, slightly more simple, but almost as delicious as the Virgin Oak.

Two random whiskies picked from BenRiach’s warehouse, and if this is the general quality level they’re putting out there, I might have to start collecting this stuff and forget about many other distilleries!

I’m just hoping they’re going to come out at some point!

I'm very interested in booze, with a focus on whisky. I like to listen to loads of music and play lots of Magic: the Gathering, and board games too. I'm married to Anneke, have two daughters Ot and Cato, a son Moos and a cat called Kikker (which means Frog, in Dutch). I live in Krommenie, The Netherlands.
View all posts by Sjoerd de Haan-Kramer →
This entry was posted in BenRiach and tagged BenRiach, Cask Sample, Distillery tour, PX Cask, Speyside, Virgin oak cask. Bookmark the permalink.

2 Responses to Two BenRiach cask samples. A Virgin Oak and a PX Sherry