One of the side effects of ordering at Whiskybase is that they generally and generously toss in a couple of wee samples of their Archives range. This means some new things to taste every once in a while, from a series that somehow gets overlooked by me. Maybe too easily, since there have been some really good whiskies in it.

This Kildalton came with a recent order (the GlenDronach 1993 of course) and since I felt like reviewing a dram on this dreary and grey afternoon, I grabbed it. Since it’s called Kildalton I’d guess this is an Ardbeg, just by the name of it.

It’s a young one, but surprisingly after only seven years in oak it it already down to 54.4%. Most whiskies four times its age are showing more oomph, but I guess this is still at cask strength. There doesn’t seem to be much reason for watering it down slightly. 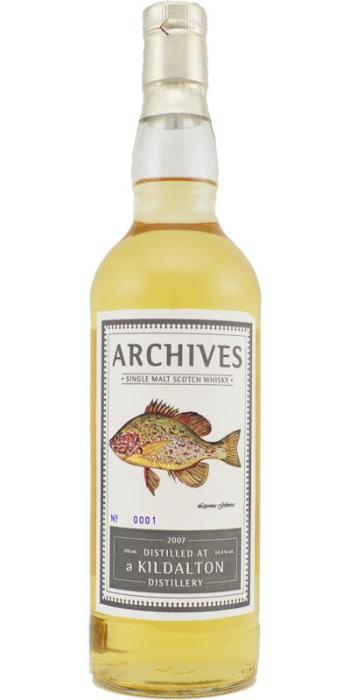 Kildalton 7yo. Image from Whiskybase

Sniff:
I still say it’s Ardbeg. The peat is thick with lots of earthy undertones and withered heather. There’s a slight salinity and grassiness just overpowering a gentle layer of sugar, barley and oak. Some hints of vanilla custard too.

Sip:
The palate is very fierce with heaps of salt and pepper, a sharp herbaceousness and the sweetness is pushed far back. Especially the pepper sticks out. This will sure wake you up, even if it pummels your palate into submission. Grass, heather, oaky spices, sugar and maybe a hint of cheesecake? Slightly thicker than I expected.

Swallow:
The finish is much more gentle although it has a slight burn in your throat. I get hints of Riesling with a slight sparkle. Later it turns slightly more sweet with sugar and a more Muscatel like thickness. The peat is back with a dry earthy kind.

When you know you’re trying a young Islay whisky, you expect lots of peat, burn and grassy notes. This one delivers on all fronts. It’s quite fierce but pretty good, probably because of the fierceness. It does dull the senses somewhat, but that was exactly what I was looking for. It does make you feel alive, even though your tongue feels like an ashtray after drinking it.

So, in that aspect, a very well done and well picked whisky! It doesn’t offer too much complexity, but it sure offers fun. Good stuff!

Full disclosure: This sample was given to at no cost by the guys at Whiskybase. Thanks!

I'm very interested in booze, with a focus on whisky. I like to listen to loads of music and play lots of Magic: the Gathering, and board games too. I'm married to Anneke, have two daughters Ot and Cato, a son Moos and a cat called Kikker (which means Frog, in Dutch). I live in Krommenie, The Netherlands.
View all posts by Sjoerd de Haan-Kramer →
This entry was posted in Ardbeg, Undisclosed and tagged Archives, Ardbeg, Fishes of Samoa, Free Sample, Islay, Kildalton, Undisclosed, Undisclosed Distillery, Whiskybase. Bookmark the permalink.