Convalmore is an interesting distillery. Mostly because it closed in 1985. The eighties saw many distilleries closing, like Port Ellen, Brora and many others. Unlike those two, Convalmore hasn’t been many people’s focus since the whisky supposedly wasn’t all that good. The same can be said about Port Ellen, back in those days, though.

However, even though I haven’t tasted all that many Convalmores, the ones I’ve had have all been rather kick-ass. There was one at Maltstock in a tasting by Michael Lord. The first Blind Tasting Competition closed with one as well.

Even if you check prices now, they’ve gone up obviously. It’s not in the range of many of the other closed distilleries, so that might be rather interesting when watching auctions. Anyway, I think I traded this sample with whisky buddy Martin. Or I bought it, but at least it’s coming from him. 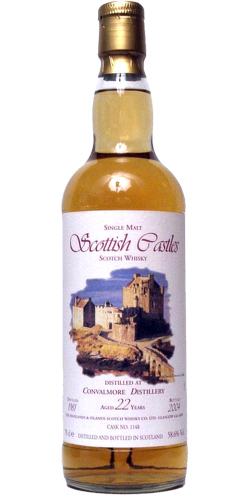 Convalmore 22yo. Image from Whiskybase

Sniff:
The nose is old and typical of many whiskies I’ve tried from this period. It’s quite like old Clynelish and Inchgower, and other Highlands or Speyside distilleries. Which means I find it hard to describe. At least there’s oak and lots of wax. Beeswax and candles. A light hint of smoke and licorice, mint and a hint of solvent. Freshly cut oak and wood oils.

Sip:
The palate is very old fashioned as well, with lots and lots of oak, acrylic paint and solvent. Also the beeswax and candles again. Pine resin and pine needles. Honey, mint, menthol (not unlike the cigarettes). Chalk and licorice.

Swallow:
The finish is suddenly much, much more fruity with pineapple, fresh and crisp apple, pear, melon. A light smoke again and the paint and solvent flavor is back too. Syrupy.

When I opened this sample and poured it, I walked upstairs to let the misses have a sniff. Unfortunately for her she had just brushed her teeth and couldn’t revel in the greatness of this dram. It’s an absolutely gorgeous one and shows a very old fashioned character that I really, really love. The oak is huge but not overpowering and there are lots of other flavors and scents to keep you busy.

I really enjoy the pine and wax flavors. Unfortunately you don’t find them very often. At least not in drams that I generally find affordable. In this case, I might have to remember it and look for it in auctions. I love this stuff and I want a bottle of it.

I'm very interested in booze, with a focus on whisky. I like to listen to loads of music and play lots of Magic: the Gathering, and board games too. I'm married to Anneke, have two daughters Ot and Cato, a son Moos and a cat called Kikker (which means Frog, in Dutch). I live in Krommenie, The Netherlands.
View all posts by Sjoerd de Haan-Kramer →
This entry was posted in Convalmore and tagged 1981, Closed Distillery, Convalmore, Dufftown, Jack Wiebers, Speyside. Bookmark the permalink.