Most people know I love Clynelish. Luckily, there have been a lot of awesome bottlings over the years varying from a couple years to a couple of decades old. In the last couple of years, the more recent bottlings that have been very popular have mostly come from 1997.

That means to me that when a new one from 1997 pops up, I want to try it. I missed this one initially, but since Serge sent me samples of his bottlings for the Liquid Art label, I get a chance after all. The obvious and massive drawback is that it’s long since sold out.

Generally, my preference goes towards bourbon matured Clynelishes, since sherried ones can quickly get gluey. I’ve tried a couple that were just plain weird and in which the waxy notes really didn’t combine with the sherry. On the other hand I’ve also tried The Whisky Exchange’s 18 year old, heavily sherried Clynelish from last year’s retro labels. That was a stunner.

This one then. There’s not too much info about it online, apart from it being a 1997 Clynelish. It doesn’t even say whether this is from a sherry or a bourbon cask, but if I had to guess it would be a sherry hogshead, or another cask made of American oak. 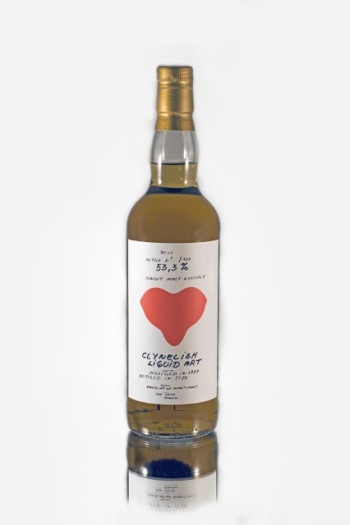 Sniff:
I think I get a clear sherry influence, with some added ‘greenness’, like yesterday’s Glen Elgin. With this that develops slightly different with a scent not unlike cooked vegetables. That’s a form of sulphur, if you care. It becomes more sweet after a couple of minutes with slightly spicy sherry. Spiced sponge cake.

Sip:
The palate is light but sweet and hot, with a flavor like manzanilla sherry (but what do I know). There’s oak and furniture polish. Dried plums and dried apricots, syrupy. But also with a hint of vanilla cream.

Swallow:
The finish becomes even sweeter and has flavors that remind me of Schwarzwalder Kirsch (Black Forest Cake). The German cake with black cherries. It’s a long finish.

I just read up on other reviews of this, but it seems Ruben and Serge and I have vastly different palates. Quite intersting, actually. Serge states it’s very waxy and while that wasn’t a note that was overly prominent to me, I do agree there’s some wax. He also notes a hint of clay, and that’s what I found interesting. Clay and sherry is probably what makes for that green note that sherry casks can sometimes display. I found it in my Auchentoshan 18, but when I last tried it last week I couldn’t really find it anymore.

Having said that, it means that whisky does change quite a bit in the bottle after there has been some air let in. Quite interesting!

Regarding the whisky. It’s good. I had to get used to that vegetable/clay note at first, but that doesn’t mean it’s bad. Far from it. I actually quite love this and, as with yesterday’s Glen Elgin, if it would have been available I’d buy a bottle.

The more gentle flavors from the sherry, combined with the big fruitiness of the whisky is pretty awesome. A kick ass pick by the guys at Liquid Art.

Thanks to Serge for the sample!

I'm very interested in booze, with a focus on whisky. I like to listen to loads of music and play lots of Magic: the Gathering, and board games too. I'm married to Anneke, have two daughters Ot and Cato, a son Moos and a cat called Kikker (which means Frog, in Dutch). I live in Krommenie, The Netherlands.
View all posts by Sjoerd de Haan-Kramer →
This entry was posted in Clynelish and tagged 1997, Clynelish, Free Sample, Highlands, Liquid Art. Bookmark the permalink.