Arran is on a roll the last year or two, with many private cask releases and also quite a few releases for themselves. Since about five years or so they’ve also got a peated whisky on the market, called Arran Machrie Moor. I’ve once reviewed their first edition and wasn’t too charmed by it.

They’re also releasing the peated stuff as a private release every now and then. I believe there was a peated Arran for The Whisky Fair in Limburg last year, and there’s this one for the Belgian market. Maybe there’s more, but let’s start here. 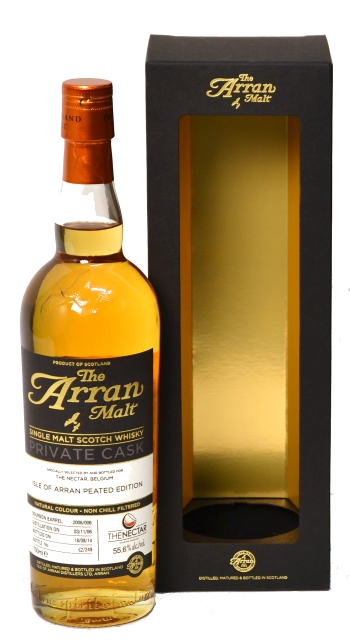 Sniff:
On the nose it start off as the regular bourbon cask matured Arran with a tad more vanilla than usual, but the same huge layer of yellow fruits. Apples, pineapples, some pear. It’s peat is there but very lightly. If I hadn’t known it was peated, I might have overlooked it. There is a scent of plants that gets heavier with a couple minutes in the glass, while the vanilla gets less. Some straw too.

Sip:
The palate is a tad less fruity than the nose, but it also builds a bit. The plant scent translates into a plant flavor with heather and straw. Pineapple again, and oak. Here the smoke is still light but slightly more detectable than on the nose. As said, the fruit builds a bit to higher intensity.

Swallow:
The finish suddenly has more vanilla and a flavor of custard. Some garden herbs too, like thyme. The straw is here too but the fruits dissipate quickly. It’s long and lightly smoky.

At first, when I was nosing it I was a bit disappointed because the peat was too light to make a real impact, but the fruits were lovely again. I really love the fruitiness of this whisky, but since it’s present in all the bourbon casks I’ve tasted recently, I don’t feel the need to start buying loads of them.

The smoke gains a bit in intensity towards the finish, which is a good thing. I still think it should have been slightly more prominent to really make a difference. The herbal flavors in the finish work really well with the fruit that was already there. Maybe thyme and pineapple is a thing? I might try it on the barbecue this summer!

I'm very interested in booze, with a focus on whisky. I like to listen to loads of music and play lots of Magic: the Gathering, and board games too. I'm married to Anneke, have two daughters Ot and Cato, a son Moos and a cat called Kikker (which means Frog, in Dutch). I live in Krommenie, The Netherlands.
View all posts by Sjoerd de Haan-Kramer →
This entry was posted in Arran and tagged Arran, Belgium, Islands, Isle of Arran, Lochranza, The Nectar. Bookmark the permalink.