When I recently started to give away some books I had racked up in the attic and I no longer wanted or needed, a couple whisky buddies were interested in some. They, as whisky buddies do, offered a sample in return (they could’ve gotten them for free, but they’re a nice bunch).

This sample was one of them and I was happy to have it. I don’t review much Aultmore, and this is an oldie at that. Bottled over a decade ago from an era when a sherry cask was really a sherry cask, at significant strength. Sounds like a good plan to try it right away!

Aultmore is a distillery that’s not on my radar. I’ve tried a few over the years and none of them were very good, with a real low being hit with our club bottling a couple of years ago. I really didn’t like that one and I didn’t buy it. Let’s see where this one lands. 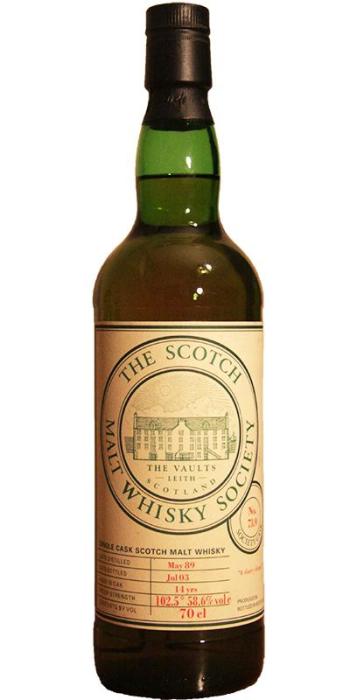 Sniff:
A huge hit of leather at the beginning, with old bananas, and sherry. It’s lightly spicy with oak and mint. Quite sharp and some peppery heat. Dried plums, thick sherry and peaches too.

Sip:
The palate has old overripe fruit like those old bananas on the nose. Oak, and dried peach, apricot and plums. Leather, lots and lots of wood. It’s heavy and cloying, and slightly spicy. Very sharp and some other wood spices too.

Swallow:
The finish has leather again and is also a tad mineral like, with some iron, oak, lots of sherry. Quite beefy.

This is a massive dram. It seems like in general the SMWS knows what it’s doing with a lot of highlights and only some deceptions. This one falls in the first category. The sherry is huge but not overpowering the whisky and it’s sharp enough to keep you slightly on edge.

Even for a dram at almost 60% it’s very sharp and hot. There’s quite some hot spiciness with pepper and some other things going on, which combines very well with the dried fruits, sherry and oak. In short, I love this whisky. Not a ’90-pointer’, but surely up in the eighties.

Thanks to Rowald for the sample!

I'm very interested in booze, with a focus on whisky. I like to listen to loads of music and play lots of Magic: the Gathering, and board games too. I'm married to Anneke, have two daughters Ot and Cato, a son Moos and a cat called Kikker (which means Frog, in Dutch). I live in Krommenie, The Netherlands.
View all posts by Sjoerd de Haan-Kramer →
This entry was posted in Aultmore and tagged 1989, Aultmore, Scotch Malt Whisky Society, Sherry Cask, SMWS, Speyside. Bookmark the permalink.