Diageo releases their annual premium releases in Autumn. Sometimes, however, something goes wrong and it takes a lot longer for those releases to pop up in the Dutch stores. This was the case in 2013, which is why this whisky was in De Whiskykoning‘s ‘ Best of 2014’ tasting.

I’ve always been a fan of the Lagavulin 12 that is in their annual releases every year. Mostly because with the Caol Ila they’re the only two affordable drams in the set. Also because, well, it’s Lagavulin. I love Lagavulin. I don’t think I’ve ever had a bad one.

The annual 12 year old is made up of bourbon casks, which is something you don’t see often in official Lagavulins. Mostly they’re at least slightly sherried, with the Distiller’s Edition (the other annual release, albeit less premium) being quite thickly sherried. 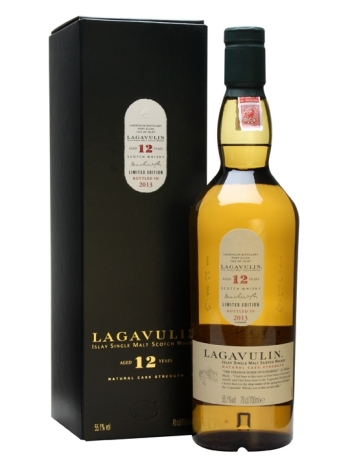 Sniff:
The nose is quite light but really sharp. It seems there’s just bite and not much bark, but that changes. After a little bit of air it gives you scents of straw, peat and smoke. Malt, grain and bread. A touch of vanilla too. Simple, but very well done.

Sip:
The palate is much more gentle on the arrival than the nose was. It does build up a bit if you let it swim (that’s the alcohol eating you, mind!). Some green tea, peat and oak. Then straw and heather but the light bitterness gets sweeter with more hints of vanilla after a few seconds.

Swallow:
Another smack in the face. It’s a blast of oak and peat and smoke, with some sweetness from the malt and barley sugars. It’s long and sweet.

Since this whisky was in the ‘best of 2014’ tasting, we all had high expectations. It’s funny how such a thing goes because everybody was slightly disappointed. At first. This one needs a little bit of time to show all it can do. After a minute or two the general consensus started it’s slow 180 degree turn.

The final result was that everybody loved this dram, even the guys who proclaimed generally not liking peated drams. Even though it’s strong and fierce. It’s not a complex whisky but what it does it does very, very well.

In short, I really love this whisky and I’m very glad I got myself a bottle last year. Especially since I traded it for another one that I didn’t necessarily want to keep. Some Adelphi Ardbeg I bought when I still liked young Ardbeg.

I'm very interested in booze, with a focus on whisky. I like to listen to loads of music and play lots of Magic: the Gathering, and board games too. I'm married to Anneke, have two daughters Ot and Cato, a son Moos and a cat called Kikker (which means Frog, in Dutch). I live in Krommenie, The Netherlands.
View all posts by Sjoerd de Haan-Kramer →
This entry was posted in Lagavulin and tagged 2013, Diageo, Diageo Premium, Islay, Lagavulin, Whisky tasting, Whiskykoning. Bookmark the permalink.