One Eight Spirits seems to be one of those sort-of random spirits producers in the USA of which there are hundreds popping up everywhere. They are called One Eight for Article One, Section Eight of the constitution which provided for the area now known as DC to exist as the USA’s capital.

Apart from that they produce vodka and gin, like all other start-up distilleries. They have recently released a bourbon which they finished in sherry casks. I can’t find whether or not they distilled the bourbon themselves or bought the product.

New American distilleries generally try to be at least slightly obscure about when they went into business, but I think those guys started in 2013. With it only being two years, I suspect they’ve not really had time to make a proper bourbon AND finish it in a sherry cask. But then again, maybe they did. FEW’s bourbon is also just about a year old.

I got this sample from a bottle share by DSA, like yesterday’s Rhetoric. I had never heard of the distillery before, but I like trying new things. A sherry finished bourbon is not something you come across often so that was a nice change of pace. 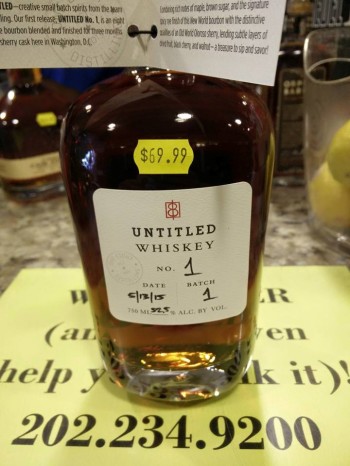 Sniff:
The nose starts with big bourbon hints. Spicy with lots of corn, caramel and oak. It becomes a bit sweeter after the initial arrival with dried fruits, apricot and plums and fresh cherries. From there on the fruit gets bigger and bigger. It’s weird, but tasty, if you can handle the slightly rubbery note.

Sip:
The palate again starts with lots of bourbon, heavy, spicy, with oak. Slightly bitter even. Less sharp than the 52.5% ABV made me expect. It’s getting drier after a few seconds and has a tiny hint of cardboard. Then, like on the nose, the sherry does it’s thing. Massive notes of apricot, but also plums and peaches. The fruit with the thick corn like sweetness is very interesting and quite unique.

Swallow:
The finish is gentle, with, again, first bourbon and then sherry. There’s a certain rye like spiciness here. The finish is long, sweet and oaky with hints of corn.

This is a strange drink. Mostly because it combines things that are normally an ocean apart. Bourbon normally comes with very oaky notes of the fresh wood used for the barrels. The layer of sherry is entirely new (to me, I know there’s been a Jim Beam and a Wild Turkey from a sherry cask).

What matters, of course, is whether or not it’s any good. In short: Yes. I think it’s more interesting than good, but it still is really good and I’d happily work my way through a bottle. It actually works very well to have the bourbon sweetness on top of the sherry sweetness. I expected it to be too much and too cloying, but that’s not the case.

Well done by the guys at One Eight Distilling!

One Eight Sherry Finished Bourbon, 52.5%, Not a clue to where you can get this.

I'm very interested in booze, with a focus on whisky. I like to listen to loads of music and play lots of Magic: the Gathering, and board games too. I'm married to Anneke, have two daughters Ot and Cato, a son Moos and a cat called Kikker (which means Frog, in Dutch). I live in Krommenie, The Netherlands.
View all posts by Sjoerd de Haan-Kramer →
This entry was posted in - American Whiskey and tagged Bourbon, DC, One Eight Distilling, Sherry finish, USA, Washington. Bookmark the permalink.