The penultimate day of the Blind Tasting Competition was upon us yesterday. A big and sherried whisky was waiting for us and the only thing we knew was that it couldn’t be a Highlander.

The BenRiach it turned out to be, yesterday, is bottled ‘Fur Independent Spirit’ in Germany. The whisky was drawn from an Oloroso Sherry Butt and the fact that it was a sherry cask was no surprise after a single whiff of the booze. 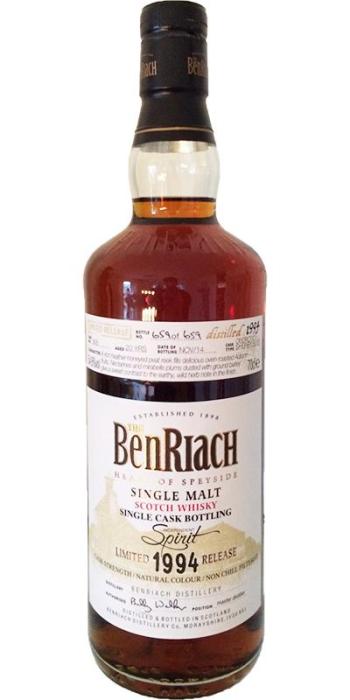 Sniff:
Lots of sherry with bread and bread sticks. Dried plums and a bit fiery. A quite light profile behind all this sherry, with sponge cake. After a while some leather and furniture wax pops up.

Sip:
Some chili pepper. Mild on the arrival but it ramps up to a peppery bit of firewater right after. Bread, buttery toast and brown sugar. Peach and plum too.

Swallow:
The gentle finish is surprising. Surprisingly long too. Lots of sherry and spiced cake and some fruit. After a few seconds it’s suddenly a bit sharper but then mellows down nicely.

I went for Bunnahabhain, but doubted BenRiach for a while too. I didn’t pick it since I couldn’t really fathom the character of the spirit (the leather, and pepper) with BenRiach, but I’ve had heavily sherried Bunnahabhains that were a bit similar to this.

Since I also picked the wrong age (five years off) and the wrong ABV (4% off) I didn’t get any points. By now I’m used to it. I have more experience with it than actually getting points. It’s quite humiliating, this.

About the whisky then. It’s a ridiculously sherried whisky, but it’s really, really good. The sherry is really huge, but also quite interesting and leaves for a very interesting whisky with lots of different flavors. An awesome dram.

I'm very interested in booze, with a focus on whisky. I like to listen to loads of music and play lots of Magic: the Gathering, and board games too. I'm married to Anneke, have two daughters Ot and Cato, a son Moos and a cat called Kikker (which means Frog, in Dutch). I live in Krommenie, The Netherlands.
View all posts by Sjoerd de Haan-Kramer →
This entry was posted in BenRiach and tagged 1994, BenRiach, Blind Tasting Competition, Cask Strength, Germany, Independent Spirit, Oloroso Cask, Sherry Cask, Speyside, Usquebaugh Society. Bookmark the permalink.