Sometimes you come across a whisky that you really want to like. I’ve had that with quite a few Edradours over the years, but so far it’s never really worked out. In this case I’m not talking about all those freaky maturations and finishes, with which I don’t even bother anymore.

Just regular bourbon or sherry casks, when they come by. Some I do like, but others not so much. Unfortunately for Edradour (while I seriously doubt they care what I think of their product) the ones I enjoy are vastly outnumbered by the ones I don’t like.

I tried this one blind, without knowing anything about what was in my glass. No age, abv, region or distillery. No information apart from the color of the whisky, which is no information at all, really.

So, I went about this as honest as can be. No information also means no prejudice.

Sniff:
Quite ethereal, somehow. Light on the nose, but a hint of hospital ether, and some dry leather. Straw and husk without the richness of the barley itself. Very light, maybe a little bit too light? A very light hint of oak.

Sip:
Surprisingly sharp on the tongue, with quite a bit of alcohol. Somehow this isn’t matched by flavor. There’s some straw, some barley, some oak. But there not a lot of any of them. Again, that dry leather and ether note. A bit austere, but not with the normal notes of minerals or iron. It does turn a bit syrupy after a while.

Swallow:
The finish is very weird. Very old fashioned somehow, but weird. Very austere with some musty, moldy notes of bread. Some oak, some straw. Sweeter than I expected and quite long.

Apparently this needed longer to open up, so a second round was needed. 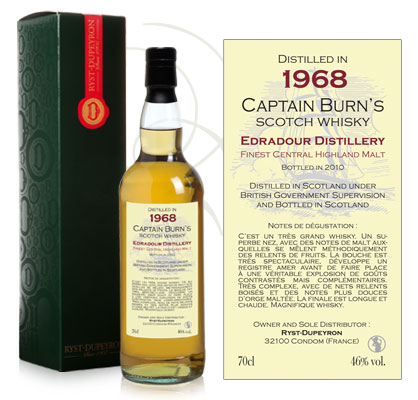 Sniff:
The moldy notes I got on the finish are present on the nose as well. It’s like the leather and ether somehow had a love child. And it’s an ugly one. Not necessarily bad tasting, but ugly. Oh, certain interesting.

Sip:
The added taste after fifteen minutes of swimming is tooth grit. You know, when the dentist is drilling and tiny bits land on your tongue. On top of everything that was already there before.

Swallow:
The first, but very quickly passing flavor is of fanta. So there some hint of ‘orange flavor’ on the finish too.

A very strange whisky. In no way have I ever had something like this before. It certainly is interesting, if only because of novelty. I’m not liking this very much. One of those dram that you’d love to have a sample of, but not a bottle.

The finish is quite long, which is neither good nor bad. The flavors integrate well, but are just weird. I had associations with this whisky that I’ve never had before, and probably never will again. Strange, not necessarily good, but interesting.

So, when it turned out to be a 42 year old Edradour I was a tad disappointed, but not very surprised. As it seems the age of Edradour doesn’t really matter to me, since I don’t really enjoy most of them whether they’re old or young.

I'm very interested in booze, with a focus on whisky. I like to listen to loads of music and play lots of Magic: the Gathering, and board games too. I'm married to Anneke, have two daughters Ot and Cato, a son Moos and a cat called Kikker (which means Frog, in Dutch). I live in Krommenie, The Netherlands.
View all posts by Sjoerd de Haan-Kramer →
This entry was posted in Edradour and tagged 1968, Captain Burn's, Edradour, Highlands. Bookmark the permalink.