Tomintoul is one of those distilleries that’s been around forever, but has only a very limited number of releases. Somehow, I have not even tried those. Also, from independent bottlers I’ve not tried many, and I don’t think there are an awful lot of them available.

Add to that that Maltbarn is not regularly available in a lot of shops in The Netherlands, which means this bottling has never been on my radar. Luckily I was able to get a sample from whisky mate MZ and I got around to trying it last weekend.

According to my information the vast majority of Tomintoul’s output goes towards the blending industry, but since it’s owned by Angus Dundee I don’t have a clue which blend this is. 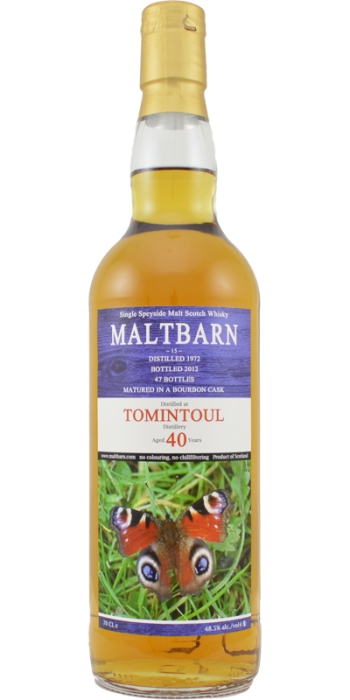 Sniff:
Lots of old barley, but it’s gentle and smooth. Soft oak, sawdust and wood mulch. Some tree bark and baking spices. The focus goes more and more towards the oak. Slightly dry with hint of fresh peach peels.

Sip:
The palate is dry and a bit sharper than the nose was. More fruit and some grains again, with oak and juicy fruits. A hint of spiciness with a flavor of white pepper.

Swallow:
The finish is quite rich. The tiny sharp edge of the palate is gone and the flavors are very comparable. Quite long.

I’m not sure what to think about this one. On one hand it’s a very tasty drink, but it doesn’t do enough for me. There’s some fruit, some spice and some wood, but it’s all quite simple and lacks a bit of depth. And even when not regarding the price (which wasn’t too high back in 2012) I expect more of a 40 year old whisky.

I'm very interested in booze, with a focus on whisky. I like to listen to loads of music and play lots of Magic: the Gathering, and board games too. I'm married to Anneke, have two daughters Ot and Cato, a son Moos and a cat called Kikker (which means Frog, in Dutch). I live in Krommenie, The Netherlands.
View all posts by Sjoerd de Haan-Kramer →
This entry was posted in Tomintoul and tagged 1972, Bourbon Cask, Maltbarn, Speyside, Tomintoul. Bookmark the permalink.