Every year for The Whisky Exchange’s The Whisky Show, the guys at Speciality Drinks *1 bottle a cask for their Masterpieces range. This range consists of whiskies that the bottlers deem especially worthy of being called Masterpieces. In the past there have been at least a Clynelish and a Caol Ila that were awesome. Unfortunately, I missed out on last year’s Bruichladdich, but this year I wanted a sample of the Laphroaig. A 20 year old at that!

Unfortunately, oldish Islay whisky is hugely popular, and unless you are the Scotch Malt Whisky Society or Cadenhead’s, you don’t have many casks and must purchase them at current cost. This makes bottling casks like this a pricy endeavour and results in a £ 200 price tag.

“Luckily”, it wasn’t at some other bottlers who ask a lot more for a whisky like this.

A 20 year old Laphroaig matured in a PX sherry cask must be good, so I was quite anxious to sit down and try it when a peaceful moment arose. This does not happen often with two little brats at home and an endless to-do list. 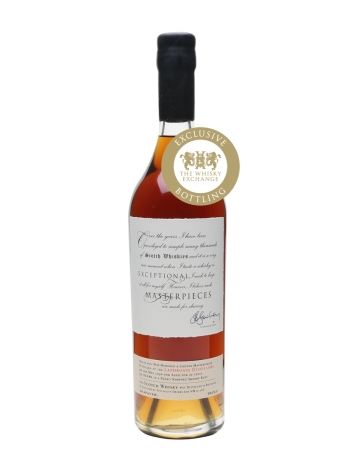 Sniff:
Initially there’s a lot of soft sherry notes, but with a sharp, peaty edge to them. Dried fruits, but also wet rope, iodine and salt. Some milk chocolate and hay as well.

Sip:
The palate is quite sharp for a whisky at just over 50% ABV. It’s also rich and full, with lots of smoke and peat. Hay and wet wool, iodine, rope. Very maritime. It’s very dry with some peaches and prunes later on. Quite luxurious.

Swallow:
The finish has a tiny hint of coffee at first, but that’s quickly pushed to the background by fruit, hay, smoke and iodine. It’s still rich and slightly less dry, with quite some oak.

It’s been over a month since I reviewed an Islay whisky, and apart from a single glass of Ardbeg at a friend’s last weekend it’s been about as long since I actually had one. Now I did, and this is the kind of Islay whisky that makes you absolutely adore the island.

Sherry and peat works miracles if done well, and this is done well. It’s still quite sharp and dry, because of peat and smoke and the dryness of the sherry cask, but there’s a lot of depth and richness to balance that. A very, very good whisky.

*1: To us normal punters The Whisky Exchange and Speciality Drinks are virtually the same companies.

I'm very interested in booze, with a focus on whisky. I like to listen to loads of music and play lots of Magic: the Gathering, and board games too. I'm married to Anneke, have two daughters Ot and Cato, a son Moos and a cat called Kikker (which means Frog, in Dutch). I live in Krommenie, The Netherlands.
View all posts by Sjoerd de Haan-Kramer →
This entry was posted in Laphroaig and tagged 1996, Bottle Share, Cask Strength, Islay, Laphroaig, PX Cask, Sherry casks, Speciality Drinks Ltd., The Whisky Exchange, The Whisky Show. Bookmark the permalink.