Yesterday’s Whatsapp discussion with SA, on the forum as ‘SigaarJood’ (he can state things like that without it being discriminatory because he’s part of a minority):

Me:
You’re getting a light smoke too?
I’m sure as hell liking it, but not a clue

SA:
Not yet. I’m going to let it sit and open a bit

Me:
I can’t think of anything with this salinity and light smoke that makes sense
I don’t think it’s funky enough for Springbank, it can’t be Talisker or Laddie or Highland Park.
It’s not Bunna

SA:
Pulteney?
I can’t figure it the age at all
You’re right that it’s a hair smokey

Me:
Might be Pulteney, but generally that has far more vanilla

We carried on like that for a while. The important bit is that I completely wrote off Bunnahabhain. Most Bunnas I know, from before and after 1991 have a far more fatty texture, and are much more malt forward too. So, it wasn’t Bunna. Right. 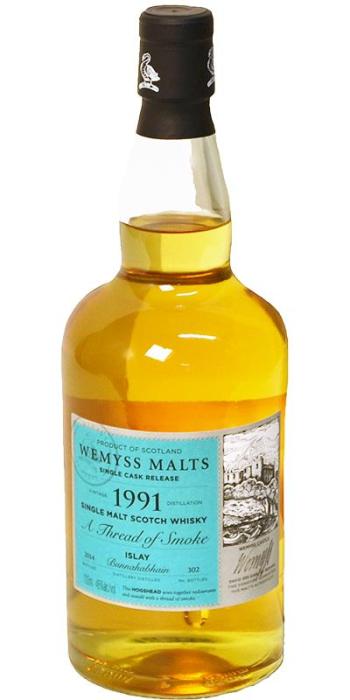 Sip:
A bit gentle on the arrival, but it gets a bit sharper after a second or two. Quite dry, more straw than hay this time. Slightly austere and lightly smoky. A tad salty maybe?

Swallow:
Dry with some oak, a light woody smokiness and a bit of mineral like austerity. Apple too.

Somewhat short tasting notes but damn. This is one awesome dram. Old fashioned complexity, gentle smoke. I bet it’s from a refill hogshead, since there’s not so much vanilla in there, which is a very good thing.

Last year my whisky of the year was a Wemyss Bowmore. Apparently these people know how to do Islay whiskies! Taking the top spot on my wishlist now!

I'm very interested in booze, with a focus on whisky. I like to listen to loads of music and play lots of Magic: the Gathering, and board games too. I'm married to Anneke, have two daughters Ot and Cato, a son Moos and a cat called Kikker (which means Frog, in Dutch). I live in Krommenie, The Netherlands.
View all posts by Sjoerd de Haan-Kramer →
This entry was posted in Bunnahabhain and tagged 1991, Blind Tasting Competition, Bunnahabhain, Islay, Usquebaugh Society, Wemyss. Bookmark the permalink.