I have no idea why exactly, but I really love Willett. They used to release heaps of old rye whiskies, but those stocks seem to have depleted. Since a couple of years they’ve been distilling their own whiskey. Before that the whiskeys were sourced from elsewhere.

This six year old is from the bought stock, since their own releases were only two years old when this one was available. I recently saw a four year old being released somewhere.

Their own distillates are not single casks, by the way, they’re small batch whiskeys.

Anyway, a single barrel rye whiskey from Kentucky. From a distillery that has a reputation for great whiskeys. Should be good, right? 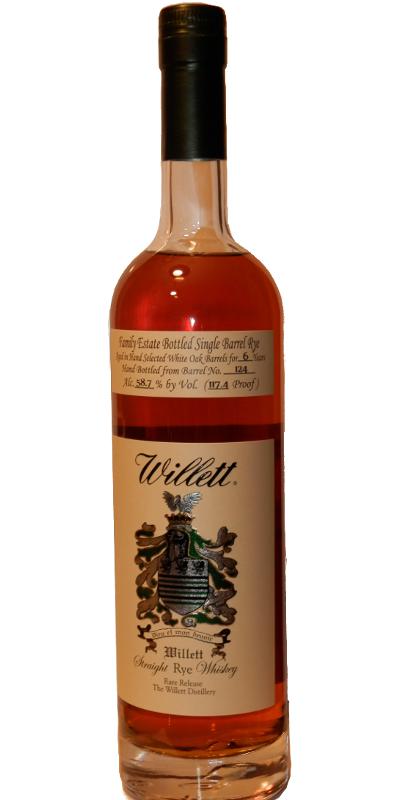 Sip:
The palate is smoother than I expected (especially since the ABV is quite high). With some pink pepper corns and dryness. Somehow the whiskey sticks to your teeth, if you know what I mean. It gets a bit more hot after some swimming. Lots of sweet oak notes with spices and leafy herbs. Some cinnamon.

Swallow:
The finish is very rich and gentle. ‘Ontbijtkoek’, which practically translates to breakfast cake, and some light spices. Pink pepper, with sweetness and hints of oak.

This is a pretty great rye whiskey. I hadn’t really sat down for it before, and when I did, I finished the bottle (there wasn’t much left anyway). It’s not overly complex, but the quality is very high and it delivers everything you expect from a six year old rye whiskey.

Apparently this still should cost around € 80, and I think it’s worth it. There are some cheaper rye whiskeys of similar age available (Sazerac comes to mind) but those are quite less impressive, while still good. This one just works. Shame it’s gone!

I'm very interested in booze, with a focus on whisky. I like to listen to loads of music and play lots of Magic: the Gathering, and board games too. I'm married to Anneke, have two daughters Ot and Cato, a son Moos and a cat called Kikker (which means Frog, in Dutch). I live in Krommenie, The Netherlands.
View all posts by Sjoerd de Haan-Kramer →
This entry was posted in - American Whiskey, - Rye Whiskey, Willett and tagged Kentucky, Rye Whiskey, Single Barrel, Willett. Bookmark the permalink.