The final dram in last November’s tasting at De Whiskykoning was this wee Caol Ila. Somehow Caol Ila had fallen a bit off my radar unless it was from the early eighties and I was a tad disappointed it wasn’t the supposedly tremendous Lagavulin for the Islay Festival of Malts and Music.

The make up of this dram was a bit random as well. While it’s not the ‘triple cask’ stuff they had a couple of years ago it’s hogsheads and butts, so not specifically a bourbon cask whisky, and not specifically a sherry cask one either.

In the past Caol Ila was one of my favorite distilleries and with some drams I’ve tasted semi-recently, I see why. Their milky, slightly dirty spirit with a good dollop of smoke really works for me. Let’s see where this one falls/fell. 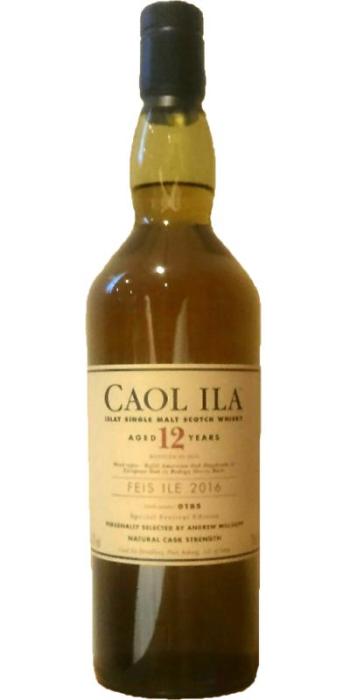 Sniff:
The style of smokiness that hits first is a bit of a diesel-y Mezcal like smoke. I love Mezcal! It’s also creamy and spicy with oak and some vanilla. Rich, oily smoke with some engine grease. Quite gentle, rich and some lysol. Towards the end it gets a bit fishy (so, brine, salt, that kind of stuff).

Sip:
The palate is sharper but still very rich. Oak and vanilla with some pastry cream. Desinfectant with some corky apple.Quite some oak indeed.

Swallow:
The finish again is sharp and rich. That Mezcal like smokiness is back again, with some engine grease and diesel. Quite long with creamy vanilla.

Well, I hadn’t need to worry about this not being awesome enough to close out an Islay tasting. This dram is bloody awesome!

The way this whisky is smoky is not something I’ve come across often, and since I have a penchant to really like Mezcal, it really works for me. During the tasting most people loved this dram the most, and I was one of them. The combination of flavors really works, and even the occassional hint of vanilla was really well placed.

In short, this is a tremendous dram, and I thoroughly loved it. Far more than I expected. I even bought a bottle!

I'm very interested in booze, with a focus on whisky. I like to listen to loads of music and play lots of Magic: the Gathering, and board games too. I'm married to Anneke, have two daughters Ot and Cato, a son Moos and a cat called Kikker (which means Frog, in Dutch). I live in Krommenie, The Netherlands.
View all posts by Sjoerd de Haan-Kramer →
This entry was posted in Caol Ila and tagged Bourbon Cask, Caol Ila, De Whiskykoning, Diageo, Feis Ile, Islay, Sherry Cask. Bookmark the permalink.