In a recent ‘sample bomb’ from Speciality Drinks Ltd. was a sample of this Bruichladdich from 1992. Since I went to the Hielander Whisky Festival last month I’ve become quite enamoured by the somewhat older whiskies that independent bottlers are releasing from Bruichladdich.

We tried some very good ones from at least Cadenhead’s and Berry Brothers and Rudd. I think there was another one, but I can’t remember from which bottler. So, when opening the box and unwrapping the tiny jars of whisky, I set to drink this one immediately.

Luckily, there’s no Bruichladdich ófficial bottling ‘cask shenanigans’ or as they call it ‘Additional Cask Enhancement’. Because, let’s be honest, we can rarely call it an enhancement (unless the whisky is utter shite to begin with…). 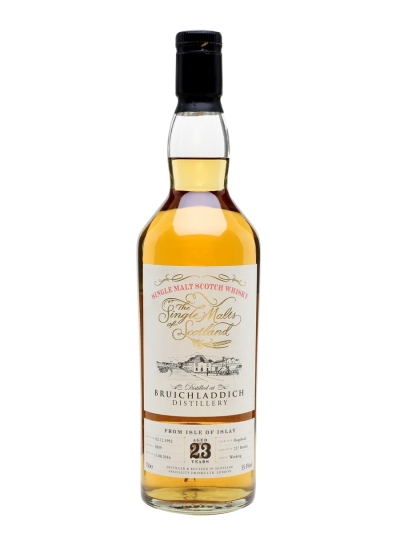 Sniff:
On the nose there’s a soft scent of malted barley, with some warm and sweetened porridge. Also, oak and dried apple. Some sponge cake, but also some minerals that make it more crisp than expected. Crisp as in the crispness of a windy forest or something.

Sip:
The palate is quite dry, and quite sharp. Some barley and oak hit me first. The wood tastes very fresh, like freshy cut planks. Also the dustiness of grist can be found on the palate. After all that there’s a flavor of custard, with that slightly fatty mouthfeel. Some vanilla and a light spiciness.

Swallow:
The finish is warming with pastry dough, baked rubarb. It’s quite sweet with hints of vanilla. All of this together makes this a bit like a rhubarb crumble, with custard. But for adults, with booze. Also some oak and grain. It’s long and rich.

As you might have guessed, I quite like this whisky. It does exactly what I hoped it would do, albeit in a slightly different way than expected. The whisky is slightly less coastal and dirty than I expected, but not less tasty, which makes me happy.

The surprising finish of rhubarb crumble had me going back for more and as you might imagine, the 3cl sample was gone in no time. My immediate thought was ‘I’ve over spent recently, but I could do a bottle share with it’. Although the idea of a bottle share is to get to try more whiskies, and I just got to try this, so that didn’t make sense either.

Let’s hope it’s still available in a month or two!

Thanks to Speciality Drinks Ltd. for sending a sample!

I'm very interested in booze, with a focus on whisky. I like to listen to loads of music and play lots of Magic: the Gathering, and board games too. I'm married to Anneke, have two daughters Ot and Cato, a son Moos and a cat called Kikker (which means Frog, in Dutch). I live in Krommenie, The Netherlands.
View all posts by Sjoerd de Haan-Kramer →
This entry was posted in Bruichladdich and tagged 1992, Bourbon Cask, Bruichladdich, Free Sample, Islay, SIngle Malts of Scotland, Speciality Drinks Ltd.. Bookmark the permalink.