Some goodies from Springbank

Springbank has long been one of my favorite (if not the favorite) distilleries in Scotland. I really liked them early on in my ‘whisky journey’, but especially since I visited the place in 2010 with my wife, I’ve been hooked.

Because of that it might not be too surprising that I generally try to get my hands on a lot of samples from this distillery, and I’ve been known to run quite some bottle shares with stuff from ‘the wee toon’. 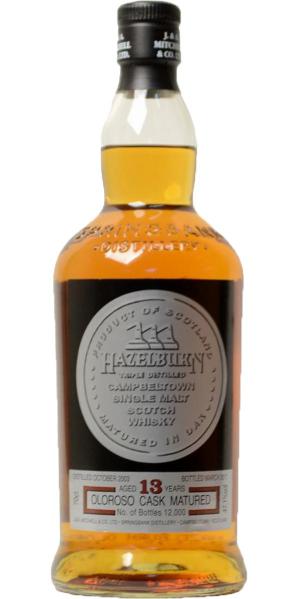 This official bottling starts quite heavy on the nose. Much heavier than I expected, honestly. Lots of sherry with notes of dried fruits and old leather. Plums, apricots, some wet barley mash. Quite rich. The palate is somewhat sweeter with more dried fruits. The flavors of mashed grains with fruit, oak, plums, peaches, leather and old wood. Some black pepper and charcoal as well (there is lot going on here). The finish is surprisingly dry and very much like Springbank (the ‘other’ kind of whisky). Leather, oak, some mustiness, but rich and dry.

This, honestly, is much, much better than I expected it to be. I did expect it to be good, but it’s actually very great. The slightly higher than normal ABV makes for a richer dram, but the slightly lighter than cask strength ABV makes this a very dangerously drinkable whisky. As you might imagine, the sample I kept for myself disappeared rather quickly. 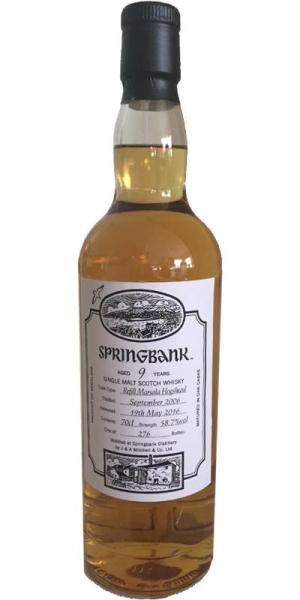 I was quite thrilled when I saw this one making the rounds, since one of the first Springbanks I really loved back in the day was the Marsala wood from a little over a decade ago.

The nose is very sharp with lots of alcohol. Hazelnuts come after, with a green and spirity background. Toasted bread with dry oak shavings. The palate is insanely sharp with lots of alcohol heat again. Very young and not a lot of wood to mellow that. Chili peppers, hazelnut, Brazil nut and maybe some almond. Not too sweet and getting richer after a while. The finish restarts the heat from the alcohol with lots of nuttiness. Some grain, oak and twigs. Not a very long finish.

Well, this certainly does not live up to my memory of the one that got me hooked. I’m not sure what the angle was when bottling this, because it’s far too sharp for me and it’s not a very mature whisky. Luckily there is some flavor to make this not a complete train wreck.

An oldie that I was able to get in auction. I heard a lot of good stuff about this whisky, and all about how I missed Springbank in the good days, when the newer CV bottlings came out some years ago. I bought this at around 150 euros, but currently they’re doing more than twice that, if Whiskybase is something to go by.

The nose is quite rich and sharper than I expected (it was the first dram of the day, admittedly). Lots of old, dry grains with the dried chaff notes as well. Porridge with a slightly buttery scent to it. In the background I’m getting some fruits. Apple, pear, grapes, kiwi maybe. The palate continues the dry and slightly sharp thing. It’s very consistent with mostly grain, oak and fruit notes. Apple, pear and grapes again. I’m thinking it’s more like dragonfruit than kiwi though. Straw, and a bit more sweetness than the nose had. The finish is rich and dry, with lots of oak and barley. The fruits gone by now.

Well, what to say. I expected a lot from this whisky and it didn’t completely deliver. I understand how this was the entry level twenty years ago, and it’s better than the current entry level CV, but it’s also not worth 150 euros. Let alone 330 or more.

This last Hazelburn is from a private cask I was able to pick up through Facebook. There’s not a lot of information on the label about the cask or when it was bottled, but if this is not a sherry cask, I might just as well sell ALL my whisky and just drink lager for the rest of my life.

There is a lot of sherry on the nose. A different kind than the other Hazelburn though. This one is more meaty, more Mortlach-y, somehow. The texture is rather light, with lots of dry baking spices. With the whisky’s meatiness that goes more towards a good stew (or a ‘steak pie filling’ or something). Dried apricots too. The palate is very consistent with the nose with the beefy flavors being very interesting and not at all weird. Slightly sweet and woody, but with quite some heat from the alcohol. The finish mellows quickly and is slightly sweeter and more ‘normal’. Still there’s that beef and stew flavor with some sweet spices.

I'm very interested in booze, with a focus on whisky. I like to listen to loads of music and play lots of Magic: the Gathering, and board games too. I'm married to Anneke, have two daughters Ot and Cato, a son Moos and a cat called Kikker (which means Frog, in Dutch). I live in Krommenie, The Netherlands.
View all posts by Sjoerd de Haan-Kramer →
This entry was posted in Hazelburn, Springbank and tagged 1997, Campbeltown, CV, Hazelburn, Private Cask, Sherry Cask, Springbank. Bookmark the permalink.

3 Responses to Some goodies from Springbank