A little while ago a friend of mine bottle shared his bottle of this old Springbank 100 Proof. It was bottled in 2005 for the Dutch market, and more specifically for Dutch bottle shop chain Gall & Gall. As far as I know Gall & Gall has focused more and more on the big brands over the years and has far less specific whiskies like this. At least, I can’t for the life of me remember when I ever saw something interesting and fairly priced in this chain of shops.

Anyway, it was a nice bottle share and I thought it smart to get my hands on a sample so I could continue my (slightly broken) series of Springbank reviews. I know I loved the old Springbank 100 Proofs, which are now replaced by the equally lovely (albeit slightly different) Springbank 12 Cask Strength series. 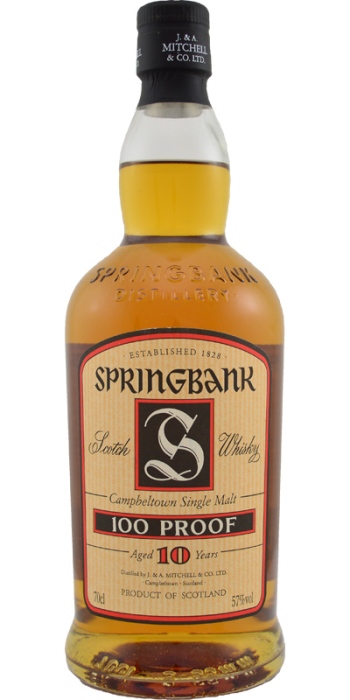 Sniff:
The nose is rather strong and very ‘old fashioned’. It focuses on old barley, hay and some flint. There’s a whiff of smoke that comes off as slightly industrial. A rather pungent dram, but in a very good way.

Sip:
The palate is dry and rough. Almost gritty, with hints of malt sugar, oak and some heat from the alcohol. Barley, flint, apple and hay.

Swallow:
The finish has a note of apple peels, with oak and barley. It’s rather rich and well balanced. Very classical.

I am a bit of a Springbank fanboy, although far from the biggest fan out there. This is the kind of Springbank that made me fall in love with the brand a decade ago. It’s strong, no nonsense whisky, with a very classical approach to it. By that I mean it’s not an ‘engineered’ whisky, or one with fancy usage of casks. It showcases Springbank as a working museum, more or less.

It’s a highly enjoyable dram, and one that I wouldn’t mind having more of. However, this being bottled over a decade ago, you’re not going to find this outside of auctions or the secondary market. According to Whiskybase, this is going for about € 165, but that price might be outdated.

I'm very interested in booze, with a focus on whisky. I like to listen to loads of music and play lots of Magic: the Gathering, and board games too. I'm married to Anneke, have two daughters Ot and Cato, a son Moos and a cat called Kikker (which means Frog, in Dutch). I live in Krommenie, The Netherlands.
View all posts by Sjoerd de Haan-Kramer →
This entry was posted in Springbank and tagged 100 Proof, Campbeltown, Gall & Gall, Springbank. Bookmark the permalink.