I’m a tad late in reviewing this, about a year or so. This 11 year old Local Barley release is Springbank’s second release of the five promised bottlings. The first being the 16 year old and the third is a 10 year old that came out in December.

The most identifying about this whisky is that it’s made with Bere barley. Bere is an ancient species of barley. Bere is old type of barley that was supposedly brought to Scotland by the Vikings. The word is old Scots for barley and is a type that grows in a short season of long days of sunlight, which makes it acclimated to the north of Scotland. Currently it is only grown on Orkney, Caithness and some other locations.

It is no longer used often, since the barley only has a low sugar yield, and therefore alcohol yield. Also, newer strains are much more drought and disease restistant, which makes it far more profitable to grow different strains.

The last couple of years it has experienced some sort of revival with the immense boom in whisky popularity, and the distilleries’ search to stand out from the crowd. Arran, Bruichladdich and Springbank have all released some Bere barley whiskies.

Anyway, this is Springbank’s edition. I expect there will be some more in the not too distant future. Of course, because of the gimmicky-ness of the whisky, it wasn’t cheap. Currently, it is somehow still available for some 125 euros. 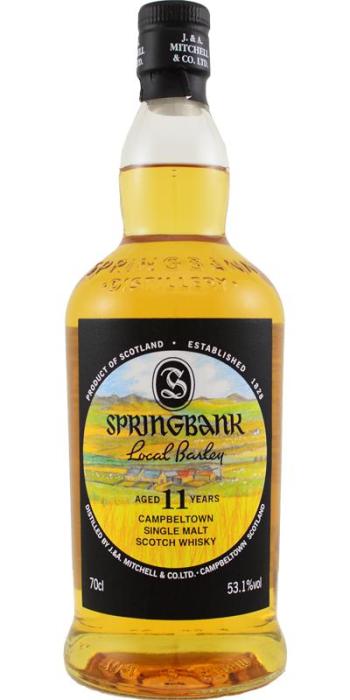 Sniff:
On the nose the barley gets a lot of attention, with some malt sugar too. Quite grain whisky like, to be honest, but with more depth, especially considering the age. It’s quite crisp, with a ‘snow’ like scent. Some apple chutney, coconut and pear peels. After a while I get a whiff of vanilla custard and sawdust.

Sip:
The palate is dry and rather intense. Tingling, with hints of oak and apple, some grain whisky likeness again. Slightly oily, like olive oil and a tinge of salt.

Swallow:
The finish mellows quickly, but stays rather rich. It’s crisp and dry, with lots of grain, apple and oak. Lightly spicy with a whiff of coconut.

Well, someone who says that the barley is of minor influence on the flavor of the whisky is an idiot. This is so different from any other Springbank that has come out over the years, it’s ridiculous. What I also find interesting is that this single malt of 11 years old tastes like a 25 year old Grain whisky, but with slightly more depth and dimensions.

This, of course, means I really like it. I do prefer the heavier style of Springbank found in the other Local Barley releases, but this is far from bad too. And an interesting diversion from what they normally do.

Having said that, if you keep in mind that the 10 year old from December is more or less the same price as this 11 year old, I would suggest going for the 10 year old. I find that a more impressive and memorable whisky than this. But, as said, this ain’t bad either.

I'm very interested in booze, with a focus on whisky. I like to listen to loads of music and play lots of Magic: the Gathering, and board games too. I'm married to Anneke, have two daughters Ot and Cato, a son Moos and a cat called Kikker (which means Frog, in Dutch). I live in Krommenie, The Netherlands.
View all posts by Sjoerd de Haan-Kramer →
This entry was posted in Springbank and tagged 2006, Bourbon Cask, Campbeltown, Local Barley, Springbank. Bookmark the permalink.