After the Past Future, and the Present Future, we get to the last part of the triptych. The future, as the guys at The Whisky Show’s organisation expect the future to be in the future. I’m once again very close to lose even myself in my reasoning.

Anyway, in this case I personally think they’re a bit off. More of these OLD grain whiskies, like this one, were bottled about six or seven years ago and they were affordable. At the moment they come around in batches, but I think these very old ones are very finite. I would expect the average age to go down, as has been happening for some time. Of course, there was a fairly recent batch of oldies like this, but prices were a tad higher than before, and this most likely will continue.

This one might even be a point in case, since it’s almost € 300, whereas whiskies like this were over a hundred euros cheaper a year ago. 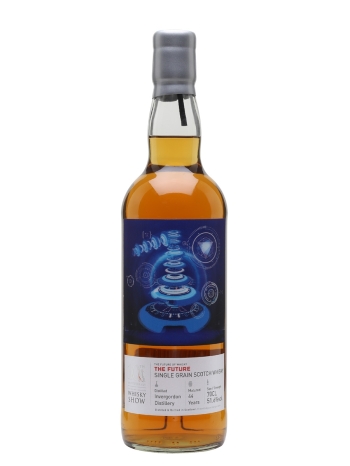 Sniff:
Lots of charcoal and oak. Lots of grain on the nose, in a sweeter way than most barley driven whiskies. Rather sugary with a hint of sugary caramel and cream.

Sip:
Drier than expected on the palate. Grainy and slightly coarse. Quite some dry oak, like old shavings and a bit of sawdust. Brown sugar, caramel and some orchard fruits like unripe pears.

Swallow:
Typical grain on the finish, but that’s quickly replaced by slightly funky caramel cream. Lots of oak and grain.

I’ve said this before in several posts on old grain whiskies, but these are not entirely in my wheel house. I like them, but I generally don’t love them. Although, in this one, I can recognize the quality. It’s closer to most barley driven whiskies than some others of similar age.

Sample supplied by The Whisky Exchange.

I'm very interested in booze, with a focus on whisky. I like to listen to loads of music and play lots of Magic: the Gathering, and board games too. I'm married to Anneke, have two daughters Ot and Cato, a son Moos and a cat called Kikker (which means Frog, in Dutch). I live in Krommenie, The Netherlands.
View all posts by Sjoerd de Haan-Kramer →
This entry was posted in - Grain Whisky, - News and Announcements, Invergordon and tagged 1974, Future Future, Grain Whisky, Highlands, Invergordon, The Whisky Exchange, The Whisky Show. Bookmark the permalink.