About a year ago Benny, from our whisky club, went to Islay and I asked him to pick up some bottles for me. This was one of them, but I never got around to properly reviewing it yet.

Yesterday I was sitting down with a late night dram and there wasn’t much left in the bottle (some 5cl or so) after I poured it. My thoughts, logically (because who needs sleep) I figured the best thing to do was to finish the bottle and finally write those tasting notes.

Lagavulin doesn’t do many special releases, and most of their whiskies follow a very strict set of rules. Lagavulin 16 is consistent, as is the annual 12 year old at cask strength. Then there’s the Distiller’s Edition (also always good). Apart from those there have been some very expensive and rare private casks over the last two or three years. Then there’s the Islay Jazz Festival release. This one. Always a NAS release at cask strength, if I’m not mistaken.

Of course that doesn’t make it any less good than age stated Lagavulins. True in this case, in a lot of other distillery’s cases not so much. 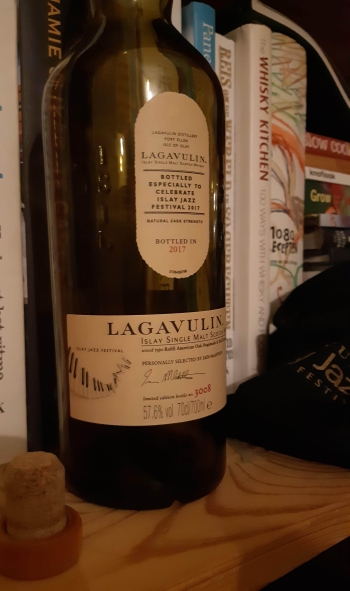 Sniff:
A heavy smoke hangs over a gently grassy whisky. It might even be a bit diesel like. Marram grass and some dry, green oak. Thyme twigs with some other herbs. Apple seeds and cores. So, slightly bitter and with a hint of minerals, iron, slate.

Sip:
A tingle of the high ABV which builds to quite a sharp sip of whisky. Peaty, smoky, salty with notes of brine, marram and oak. Some straw, sea weed, oak, and peat. I’m not getting the bitter note now.

Swallow:
The finish is quite tannic with a rather leathery effect on your tongue. I did have a bit of a large sip, so that increases the burn. The finish is long with what I can only imagine a brushfire in a peat field would smell like. Oak, brine, sea weed, marram grass, straw, peat and smoke, and a hint of leather.

Exactly what you’d expect from a cask strength Lagavulin. Which is a very good thing! This does tick all the boxes if you know what to expect. The more available Lagavulins (16yo and Distiller’s Edition) do have sherry casks in the mix, which makes this one significantly less sweet than those.

When this came out it set you back 100 pounds. Not exactly cheap, but that’s what this kind of whisky goes for nowadays. Available through the Whiskybase Marketplace for more than that.

I'm very interested in booze, with a focus on whisky. I like to listen to loads of music and play lots of Magic: the Gathering, and board games too. I'm married to Anneke, have two daughters Ot and Cato, a son Moos and a cat called Kikker (which means Frog, in Dutch). I live in Krommenie, The Netherlands.
View all posts by Sjoerd de Haan-Kramer →
This entry was posted in Lagavulin and tagged Diageo, Islay, Islay Jazz Festival, Lagavulin. Bookmark the permalink.