This sample is a fairly random one I found in my collection after ordering something from Dramtime.nl. Also, it is only the second Glenallachie from Adelphi ever, according to Whiskybase.

I find that kind of surprising, but I guess that means that I’m not the only one with some distilleries just not ‘on my radar’.

Glenallachie hasn’t gotten much press over the years apart from it being taken over by Billie Walker, after he sold BenRiach, GlenDronach and GlenGlassaugh to Brown-Forman. I guess that means that Glenallachie now is spelled GlenAllachie.

Anyway, a ridiculously strong whisky, from a refill sherry butt (number 900828). Bottled last year after being in oak for 10 years. 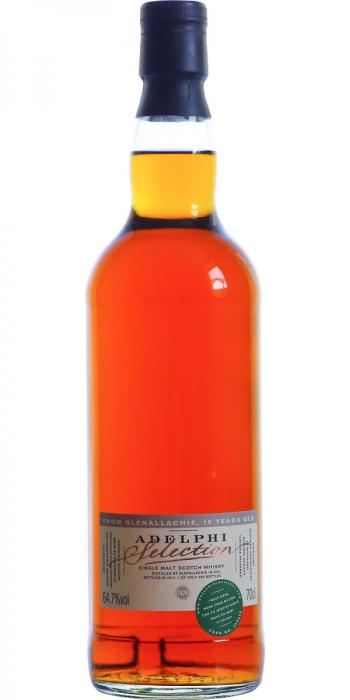 Sniff:
Dry, Oloroso sherry. Dark dried fruits, plums and dates, with the slight bitterness of the stones. Quite some oak, with a certain earthiness like in dunnage warehouses.

Sip:
Sharp, lots of alcohol heat and a battering of oak. The oak is meant in a good way, because it’s quite well integrated for a just 10 year old. Bitterness with fruit stones. Plums, dark cherries, dates. Dry, fruity with a light funk of oloroso.

Swallow:
The finish is warm and oaky with lots of sherry. Sweeter, and nuttier than before. Big stuff, this.

I did not expect this. I expected some too young, too harsh and too strong whisky. While this might be too strong, it does so in a rather well integrated way where it is at least not nonsensical.

The sherry is big, fruity and rather dark. The oak adds quite a bit of bitterness, which I love. Very good stuff this!

Thanks to Dramtime for the sample!

I'm very interested in booze, with a focus on whisky. I like to listen to loads of music and play lots of Magic: the Gathering, and board games too. I'm married to Anneke, have two daughters Ot and Cato, a son Moos and a cat called Kikker (which means Frog, in Dutch). I live in Krommenie, The Netherlands.
View all posts by Sjoerd de Haan-Kramer →
This entry was posted in Glenallachie and tagged 2007, Adelphi, Billie Walker, Glenallachie, Sherry Cask, Speyside. Bookmark the permalink.