At one point, the Lagavulin 12 cask strength, the one that is released annually by Diageo, was going to be the thing I would collect. Every year it’s a top scoring whisky that’s truly amazing for it’s money, and it’s an overseeable amount of bottles you’re collecting. I wanted focus.

However, as the years progressed and I bought the annual bottling, and sometimes an older one through the secondary market, the prices of the first few releases started to go up, with me stopping to check once they reached some € 400 for the first two releases.

What happened in more or less the same period, was that I tried the 12th release next to the 17th release. They were virtually the same. Kudos to Diageo for consistency, utterly boring to collect. A side by side tasting would be the most boring tasting ever.

Then and there I decided to sell most of what I had collected over the years, starting with the once I had twice, and some of the ones that were actually worth something. Shit hit the fan when someone bought 6 of them and PostNL lost the package. I got most of the money back so it all ended up fine, but it took six months, a lot of stress and I still lost over a hundred Euros.

Anyway, that 12th release I tried next to the 17th was nearing its end, so I wrote notes and emptied the bottle. Here we go! 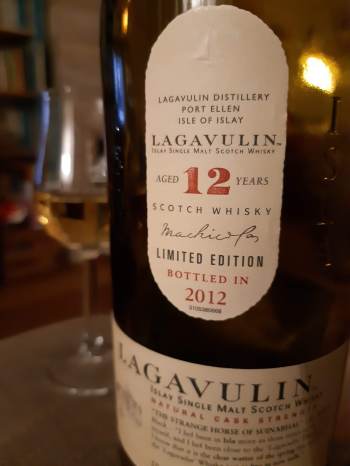 Sniff:
Quite fuel like. A massive smack of alcohol, with loads of smoke, diesel and brine. Some very light fruityness with grapes, unripe pears and apples. A bit of pine.

Sip:
Quite strong and very consistent with the nose. White grapes and unripe pears. Brine and smoke and sea weed. Very much Lagavulin as you’d expect it.

Swallow:
A bit sea wwedy again, lots of brine. Quite vegetal with some floral notes too. Smoky, slightly diesel like, some oak. Grass, brine.

So, all is well in Lagavulin Land. This is a tremendous whisky with everything that you want there. It ticks all the boxes, if you know what you’re looking for in a 12 year old Lagavulin. Quite strong, but with a very coastal and harbor like character. The brine, the sand, the fishing nets, the smoke from the boats’ engines. Gorgeous stuff.

I'm very interested in booze, with a focus on whisky. I like to listen to loads of music and play lots of Magic: the Gathering, and board games too. I'm married to Anneke, have two daughters Ot and Cato, a son Moos and a cat called Kikker (which means Frog, in Dutch). I live in Krommenie, The Netherlands.
View all posts by Sjoerd de Haan-Kramer →
This entry was posted in Lagavulin and tagged Diageo, Diageo Premium, Islay, Lagavulin. Bookmark the permalink.