I wrote a little introduction to Speyburn distillery a little while ago and I thought about copying it here. You know, just to check if people read with a bit of attention and notice.

Anyway, this whisky was released last year for the Dutch importer of the brand, Boomsma. Speyburn is not a big name in The Netherlands, so it’s quite readily available still. So readily in fact, that The Old Pipe has started to discount it from € 105 to € 85, which is quite a sensible price for a first fill sherry matured single cask, whisky. I got my bottle from elsewhere at that price too. 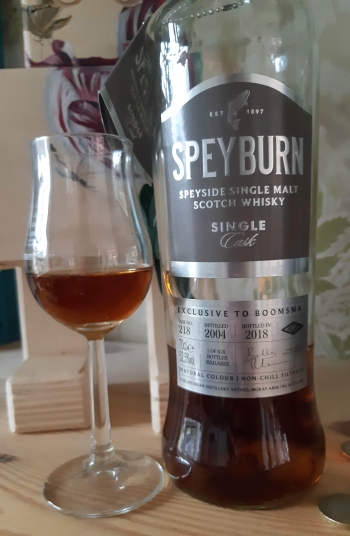 Sniff:
Candied orange with clove and a small crisp hint of mint. Some cinnamon and slightly spicy sherry. Some dunnage warehouses with whisky soaked dirt, wet concrete and old wood.

Sip:
The spiciness on the nose predicts a rather dry whisky, and that’s coming true. It’s slightly coarse and dry, with a grainy mouthfeel. The clove and cinnamon are back, with hints of clay and sawdust too. Some red chili heat, with oak and orange.

Swallow:
The finish has a fruit and spice combination that reminds me of old fashioned Macallan from years ago. The spices are a bit more pronounced and the dunnage warehouse flavors take it in its own direction though.

I very much like this whisky. As in, it’s rather complex without being uncomfortable. The flavors are quite like older style Macallans (this one comes to mind) with lots of baking spices and candied oranges. What I also like on top of that is that it shows a very different side of Speyburn compared to the regular expressions and most single casks I’ve tried the last couple of years.

Highly recommended, especially at the discounted price of € 85

I'm very interested in booze, with a focus on whisky. I like to listen to loads of music and play lots of Magic: the Gathering, and board games too. I'm married to Anneke, have two daughters Ot and Cato, a son Moos and a cat called Kikker (which means Frog, in Dutch). I live in Krommenie, The Netherlands.
View all posts by Sjoerd de Haan-Kramer →
This entry was posted in Speyburn and tagged 2004, Boomsma, Sherry Cask, Speyburn, Speyside. Bookmark the permalink.