I have very limited experience with IPA cask whiskies. Mostly because there aren’t many around. And, honestly, if Glenfiddich’s version is anything to go by, that’s not a bad thing.

I tried a sip of this whisky at Maltstock last year, where Jon Beach and Tatsuya Minagawa hosted a Scotland versus Japan whisky tasting. There were three rounds of which Japan won two. I doubt it’s reflecting the current state of the industry and attribute Scotland’s loss mostly to bad picks. Because, let’s be honest here, most current Japanese whiskies are pretty shit, compared to the legendary stuff they built their reputation on a couple of years ago. 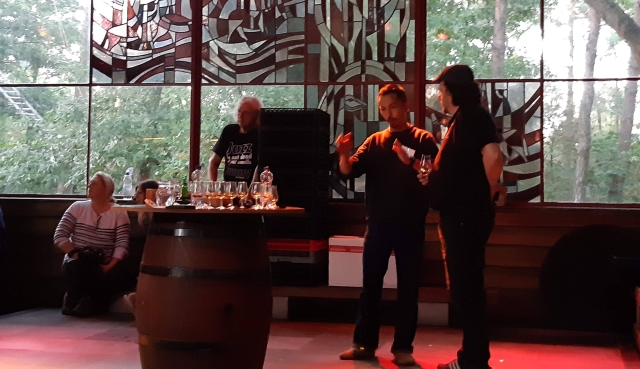 It’s not a tasting, it’s a talkshow!

Glenfiddich’s IPA cask versus this one was in the bag for Chichibu before things properly started. It was the third round if I remember correctly, and after four whiskies, of which at least one other was at cask strength, that Dufftown dram didn’t stand a chance. Then this was tasted.

Quite a light whisky, especially for a Chichibu which generally shouldn’t be tasted as anything but your last of the day. Especially their very young peated whiskies is stuff that you’ll feel going down until you flush it down the toilet.

I bought a bottle after Maltstock to bottle-share. It set us back quite a significant wad of euros, but in this case I think it has been worth it. Tasting notes then!

Sniff:
It’s quite yeasty and very citrusy at first. A massive hit of IPA or lager like yeastiness, with even the slightest eggy hint of sulfur. Most of that is trumped by a huge hit of grapefruit. There’s a little bit of oak too, and it’s quite strong, but not too much of a burn.

Sip:
On the palate it’s rather sharp with a very light body behind it. Not unlike some double/imperial IPAs out there. The grapefruit continues, but with a lot of barley, lemon, oak and a whiff of brown sugar behind it all.

Swallow:
The finish brings the pithiness of grapefruit with it. Also a bit of the oily feel that the skin can bring. Apart from that there’s a bit of heat, with lots of barley, lemon, oak. Much like the palate. A lot of dryer notes linger longest.

This is such a strange dram. If you drink it there’s two things that come to mind. The first is that it’s completely out of balance with this being the most grapefruity whisky I’ve ever had. The other is that it’s utterly delicious in all its ridiculousness.

I like citrusy whiskies, and this one is no exception. It thoroughly enjoyable and, in hindsight, I should have not spent so much money on a lot of other things to just get myself a bottle of this. But this is something I’ve realised about a million times in the past. Of course, without trying a lot of different things, you don’t know this, so there’s that.

I'm very interested in booze, with a focus on whisky. I like to listen to loads of music and play lots of Magic: the Gathering, and board games too. I'm married to Anneke, have two daughters Ot and Cato, a son Moos and a cat called Kikker (which means Frog, in Dutch). I live in Krommenie, The Netherlands.
View all posts by Sjoerd de Haan-Kramer →
This entry was posted in - Japanese Whisky, Chichibu and tagged Chichibu, Ichiro's Malt, IPA cask, Japan, Japanese Whisky, Jon Beach, Maltstock, Masterclass, Tasting, Tatsuya Minagawa. Bookmark the permalink.