I’m not sure who’s Facebook post tipped me about this bottling, but when I found out that a 21 year old Bowmore, from 1996, at cask strength could be had for about € 125 (if memory serves), I didn’t think twice.

Of course, to cover some costs I sold a few samples but I had about half the bottle to myself, and over the last couple of months I thoroughly enjoyed this one.

I think that apart from the legendary 1960s the mid nineties was the best period for Bowmore, at least from 1993 to 1996-ish. Most of the bottlings I’ve tried from that era are a bit younger than this 21 year old though. 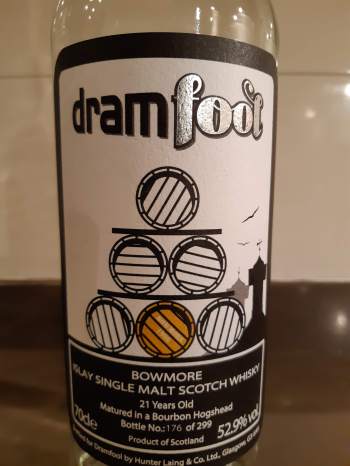 Sip:
Quite sharp compared to the nose. Dry grass and straw. Rather woody, some lemon, some violets, smoke. Quite complex, very typical for mid-nineties Bowmore.

Swallow:
A little less fruity and more dry with grasses, marram grass, dry wood twigs. Some smoke, and flowers too.

This does everything you could possible want from Bowmore, to be honest. It is one of those whiskies that reminds you about why you love that particular distillery so much, and why, maybe, it’s my favorite Islay distillery.

I'm very interested in booze, with a focus on whisky. I like to listen to loads of music and play lots of Magic: the Gathering, and board games too. I'm married to Anneke, have two daughters Ot and Cato, a son Moos and a cat called Kikker (which means Frog, in Dutch). I live in Krommenie, The Netherlands.
View all posts by Sjoerd de Haan-Kramer →
This entry was posted in Bowmore and tagged 1996, Bourbon Cask, Bowmore, Dramfool, Hunter Laing, Islay. Bookmark the permalink.