Every once in a while there is one of those drams of years ago that keep popping up, even though they drawn from a single cask. This Longmorn is such a dram. I tried it first a decade ago, at a small whisky festival organized by Dutch Whisky Connection (a familiar bunch at good festivals). GvB, one of the Longmorn Brothers, poured it and told me I made a good choice.

Ever since, I’ve been able to try it every few years. Coincidentally it was one of the more hidden drams at last January’s Bottoms Up tasting at De WhiskykoningJanuary’s Bottoms Up tasting at De Whiskykoning, and somehow a sample was in my collection. I randomly grabbed a few samples a little while ago, so I would have some things to drink on holiday, and would get through another couple samples. This happened to be in that grab.

When I looked at the label I didn’t really believe it was THAT Longmorn, but after some checking it turned out it was. Lucky me! Let’s say, it wasn’t the last dram of the week away, since I didn’t want to wait with such goodness. 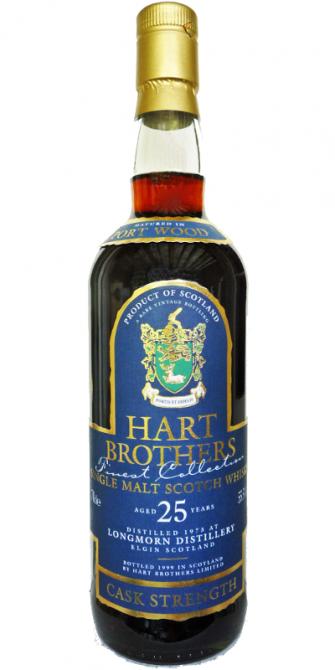 Sniff:
Massive cask influence, with insanely big and rustic oak notes. I’d put my money on European oak. Winey, with dried fruits and raisins and some rancio. Quite funky.

Sip:
Quite gentle for its ABV, with a lot of richness battling for prominence. Dried fruits, very old and syrupy port. Oak, a light bitterness, almonds. Big, big flavors.

Swallow:
The finish focuses on the lighter, more fruity notes. The oak is still present, but a bit dialled down. Tropical fruits with bitter almonds. A long, winey finish with rancio and a light funkiness.

While this is a port cask, and not a sherry cask, I would have believed either. My guess would be that this is a European oak one, since it imparted a whole array of flavors not regularly encountered anymore.

The depth of the flavors and the intensity of the oak is something stellar, and not something I’ve found in contemporary bottlings. Maybe the ones coming closest are these older bottlings of Karuizawa, and maybe some Macallans of yonder year. Epic, epic stuff.

I'm very interested in booze, with a focus on whisky. I like to listen to loads of music and play lots of Magic: the Gathering, and board games too. I'm married to Anneke, have two daughters Ot and Cato, a son Moos and a cat called Kikker (which means Frog, in Dutch). I live in Krommenie, The Netherlands.
View all posts by Sjoerd de Haan-Kramer →
This entry was posted in Longmorn and tagged 1973, Hart Brothers, Longmorn, Port Cask, Speyside. Bookmark the permalink.