After touring Glenturret a couple of months ago, with my mate JPH, we did the mandatory visit to the shop. We didn’t need to exit through the gift shop, but we came to Scotland with the intention to get some nice Distillery Only bottlings. And this we did. This one was both a Distillery Only and a nice one, as we had just experienced during the warehouse tasting. (Note to self: Blog about Glenturret Distillery)

Of course, it wouldn’t be a Distillery Only bottling if it didn’t have some Gaelic name on it, and this Toiseachadh Ur apparently means ‘new beginnings’ or something like that. A nod to the recent sale of Glenturret from Edrington to Lalique.

You more or less pronounce it as Tasigur, which is funny to some, because that’s a Magic: The Gathering card that I’m quite fond of.

What happened, as with every trip to Scotland I do, is that I overspent on the entire ordeal, so I bottle shared it. The benefit of that is that I actually get around to opening the bottle, and I already went through my own 10cl. Hence, a rather timely review. 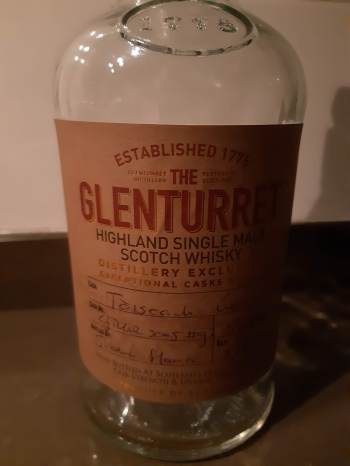 Sniff:
Strong and rich, with lots of fruity sherry. I get some of the typical heavier and feinty notes of Glenturret. Slightly leathery, with peaches and apricots. Some berries too, with a lot of oak behind it all.

Sip:
Pretty strong, and quite dry, although I think that’s mostly the alcohol. Lots of fruity, sherry sweetness. Apricots and peaches. Dry raisin twigs, so a bit of bitterness too. A bit of syrupy thickness, with lots of character. Leather, matches, hessian, rancio.

Swallow:
A big finish that is a little bit dryer than the palate. The fruitiness is a bit more generic, and it gets less feinty as it lingers.

Well, this is a big whisky. In every possible way this whisky tries to overachieve, which also makes it everything but subtle. I kind of like that every now and then. What’s a bit strange is that even though I tried it at the distillery, it didn’t remember me of my visit. That did happen with the other samples I took from the Warehouse Tasting, but not with this one. So, quite a belter if it manages to push out such an experience.

The fruit is big, the backdrop of the heavy Glenturret spirit is really well matched. It doesn’t taste too young, but the wood hasn’t overpowered it either. Great stuff!

I'm very interested in booze, with a focus on whisky. I like to listen to loads of music and play lots of Magic: the Gathering, and board games too. I'm married to Anneke, have two daughters Ot and Cato, a son Moos and a cat called Kikker (which means Frog, in Dutch). I live in Krommenie, The Netherlands.
View all posts by Sjoerd de Haan-Kramer →
This entry was posted in - Distillery, Glenturret and tagged 2005, Crieff, Distillery Only, Distillery tour, Edrington, Glenturret, Handfilled, Highlands, Lalique, Sherry Cask. Bookmark the permalink.