Back when I started drinking whisky, some 15 years ago, I started going to Whiskyslijterij De Koning. Back then he was the importer of Blackadder whiskies in The Netherlands and a Blairfindy 40 year old was on one of the top shelves. Back then it cost a staggering € 180, much like official Port Ellen and Brora releases.

Back then, that was an unachievable amount for a bottle of booze. Little did we know that a decade and a half ago, that amount would happily be paid for booze of much lesser age and much lesser quality.

Anyway, I was able to buy some half bottles a while ago from someone who was getting rid of his collection and was vouched for by Rob, of the aforementioned bottle shop. I shared almost all of it, and the last 10 cl of each I drank myself. I finished both of them a few weeks ago on a rather splendid Sunday afternoon.

Oh, Blairfindy is Blackadder’s name for Glenfarclas. Off the record, of course. 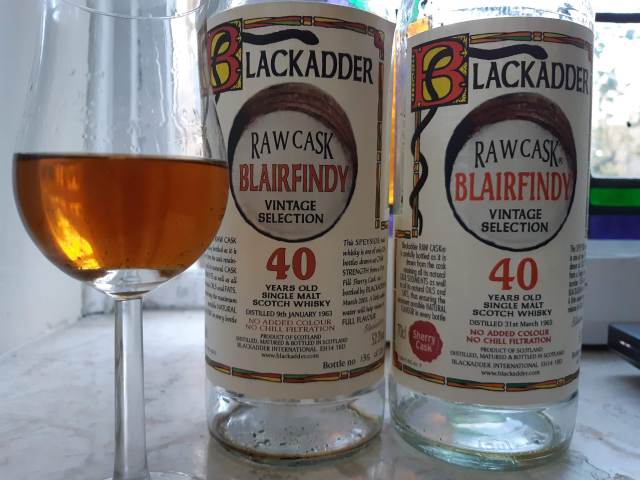 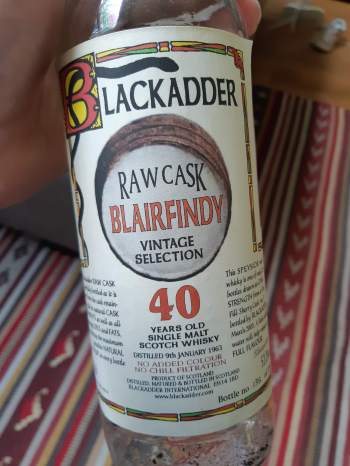 Sip:
Dry and pretty intense for a 40 year old dram. Intense nuttiness with some dried plums, raisins, apricot. Lots of oak, even some leather and hessian.

Swallow:
The finish is, if possible, even more dry, with loads of oak and leather. Wood spices and dried fruit.

Strangely, this isn’t as balanced or with as much depth as I expected. There’s a lot of flavor for sure, but they’re all big and in your face. The forty years have done some mellowing of the sharpness but the oak got added to the mix of flavors. End verdict is still quite positive, but just not 90 points positive.

The slightly less old one is a very different beast to the first one. It’s much more balanced than the previous one with a very different kind of wood influence. The sherry is toned down quite a bit and while that makes less of an impact, it does make for better balance. So, slightly less wow-factor, but just a little bit more interesting for revisiting.

Obviously, prices have changed over the years. Both because whisky has gotten ridiculously expensive, and also because these were one time only bottlings from about 15 years ago. The first one apparently goes for about € 1500, while the second one has been spotted at € 875. Insane amounts of money…

I'm very interested in booze, with a focus on whisky. I like to listen to loads of music and play lots of Magic: the Gathering, and board games too. I'm married to Anneke, have two daughters Ot and Cato, a son Moos and a cat called Kikker (which means Frog, in Dutch). I live in Krommenie, The Netherlands.
View all posts by Sjoerd de Haan-Kramer →
This entry was posted in Glenfarclas and tagged 1963, 1965, Blackadder, Blairfindy, Glenfarclas, Sherry Cask, Speyside. Bookmark the permalink.