A bit of a disclaimer first:

I only bought this bottle to get a bit more value for money on shipping costs from a whisky auction. I did buy it several years ago and it just sat on my shelf with me not caring about it at all. I only opened it a while ago because I needed to bring something to a weekend with friends, and apart for a small sample to write the below tasting notes, we finished it then and there. In short, there is zero emotional value with this bottle.

Now, I could start yapping about who Evan Williams was, and why this is one of the major Heaven Hill brands, but for some reason, I just don’t care. I would be perfectly happy if the label just said ‘Heaven Hill 9yo, cask 68’ instead of all the random branding that happens stateside. Of course, for comparing it makes sense to have some sort of categorization, but that can also be done the Four Roses way: recipes.

Anyway, yet another random bourbon review. 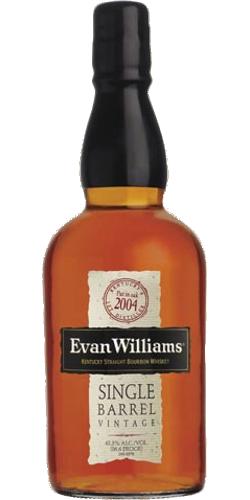 Sniff:
Sweet corn, cigars, oak. Quite a nose on this one. Very big scents for such a timid bourbon. Cinnamon, wet wood pulp, not too sweet with lots of autumn leaves and wood spices.

Sip:
Very gentle and very dry. Cigar leaves, wood spices. It’s a bit overpowered by lots of oak. Quite a bit of black pepper too.

Swallow:
The finish is gentle and slightly sweet. Again, quite some oak, pepper and autumn leaves.

So, the nose was the best part of this bourbon. The rest is quite forgettable, and even a bit overpowered by the cask, I’d say. Of course, there’s millions of people out there that prefer these oak heavy drinks, but I think it’s a bit too much.

Having said that, the nose saves it, and apart from that it’s quite forgettable.

I'm very interested in booze, with a focus on whisky. I like to listen to loads of music and play lots of Magic: the Gathering, and board games too. I'm married to Anneke, have two daughters Ot and Cato, a son Moos and a cat called Kikker (which means Frog, in Dutch). I live in Krommenie, The Netherlands.
View all posts by Sjoerd de Haan-Kramer →
This entry was posted in - Bourbon, Evan Williams, Heaven Hill and tagged 2004, Bourbon, Evan Williams, Heaven Hill, Kentucky, Single Barrel, USA. Bookmark the permalink.