This second cask of the Secret Highland whiskies from the WhiskyNerds is a joint bottling with Liquid Art from Belgium. It’s a tad older than the other one, but it’s also from a much less sherry focused cask.

As with the other one there’s not much introduction possible since we only know it’s from a Highland distillery and we don’t have anything else to go by. 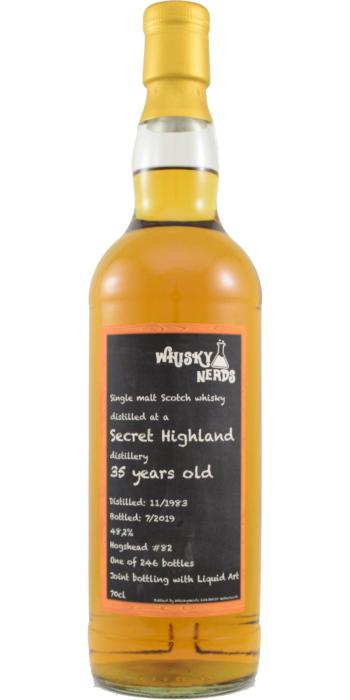 Sniff:
Very old fashioned, with lots of gentle oak, dried apples and a certain waxiness. Some struck matches, with hints of menthol and wholemeal bread. Very smooth, and quite rich.

Sip:
The palate has a bit more impact than I expected based on the nose, and it’s quite intense too. Rather dry, with oak and barley, waxiness, apples, some hints of raisin twigs and cork. Again, the wholemeal bread, with a tiny whiff of peat smoke.

Swallow:
The finish is, again, very fruity with lots of apple, dried apple, pear skins and a whiff of smokiness. The oak is very pronounced and the age shows itself here. Very old fashioned and very rich.

These notes might not be much to go by. For some reason I always have a hard time identifying flavors in these old (refill, I guess) sherry butts, but I sure do love them. It reminds me of certain older Clynelishes (minus a bit of waxiness) and Inchgowers from the same vein.

This one, compared to those, is a bit more timid, but still very rich and utterly delicious. I really appreciate the tiny hint of bitterness to give it a bit of extra depth. All is very well balanced with no flavor gaining the upper hand over the others. Awesome stuff this, and very much worth the price tag, in this day and age.

I'm very interested in booze, with a focus on whisky. I like to listen to loads of music and play lots of Magic: the Gathering, and board games too. I'm married to Anneke, have two daughters Ot and Cato, a son Moos and a cat called Kikker (which means Frog, in Dutch). I live in Krommenie, The Netherlands.
View all posts by Sjoerd de Haan-Kramer →
This entry was posted in Undisclosed and tagged 1983, Free Sample, Highlands, Sherry Cask, Undisclosed Distillery, WhiskyNerds. Bookmark the permalink.