With every ten thousand new bottlings added to WhiskyBase they release a new whisky. Apart from that Whiskybase occasionally releases something extra, and this Glen Scotia was exactly that. It was released last year, at twelve years old from a bourbon cask, but that will because adamant upon tasting the whisky.

After twelve year it still hits the fairly ridiculous ABV of 59.1%, which in itself isn’t necessarily a drawback, but over the last couple of years I’ve found myself appreciating whiskies at a lower ABV more, right around the 50% mark, I’d say.

Anyway, this being released about a year after a phenomenal visit to Glen Scotia distillery made me want this, and it was quite fairly priced, which resulted in me buying the whisky. I drank most of the bottle but sold some shares from it, resulting in this bottle being no longer in my collection now. As in, I drank the last bit, and sold about 20 centiliter this week.

Time for a review, right? 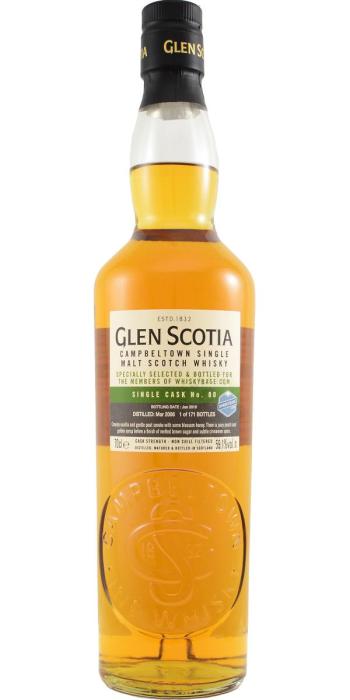 Sniff:
Quite some barley, a bit of oak and vanilla. Some minerals, some hessian, some dusty attic. Custard cream horn, with some moss and basalt. The vanilla gets more intense after a few minutes, the greener notes are pushed back a little bit, which is a pity.

Sip:
Obviously it’s hot on the arrival, at almost 60%, but it’s not as ‘bad’ as expected. The high ABV somehow keeps the vanilla in check a little bit and gives some room to the distillate to shine. There’s still some apple crumble with custard going on, but the fresh water burn, the basalt and moss are given some more room. The little bit of funkiness from the nose is gone completely.

Swallow:
The finish goes down warmly and has a bit of an afterburner. After it wanes a little bit the finish becomes nicely gentle with lots of barley and honey notes. Still the apple crumble with vanilla, but a bit sweeter.

It’s a bit too cask driven, with quite a lot of vanilla going on. This isn’t a bad thing, necessarily, but it makes for a more modern whisky that shows slightly less of the distillery’s character. I think this would’ve been better with a few years of proper mellowing in oak, with a slightly lower ABV.

I'm very interested in booze, with a focus on whisky. I like to listen to loads of music and play lots of Magic: the Gathering, and board games too. I'm married to Anneke, have two daughters Ot and Cato, a son Moos and a cat called Kikker (which means Frog, in Dutch). I live in Krommenie, The Netherlands.
View all posts by Sjoerd de Haan-Kramer →
This entry was posted in Glen Scotia and tagged 2006, Bourbon Cask, Campbeltown, Glen Scotia, Whiskybase. Bookmark the permalink.