When you see the whisky the ‘Sherrywood Matured’ on the label is kind of self explanatory. The whisky, in the bottle, is almost as dark as coffee, and even in the glass there’s quite some color to it.

Also, as you might have noticed, this is a ridiculously old bottle since it was bottled in 1998. 22 years ago. Back then I wasn’t even allowed to drink whisky. Luckily, some people have some stock and you can occasionally taste something as old as this.

MvZ gave me a sample in a trade a few years ago and with the recent ‘going through all samples’ sessions, I’ve finally found it again and drank it.

The 100 proof strength is quite something, but nothing that is too off putting for a dram like this. At least the promise is there to easily cope with the alcohol if there’s enough flavor. Let’s find out! 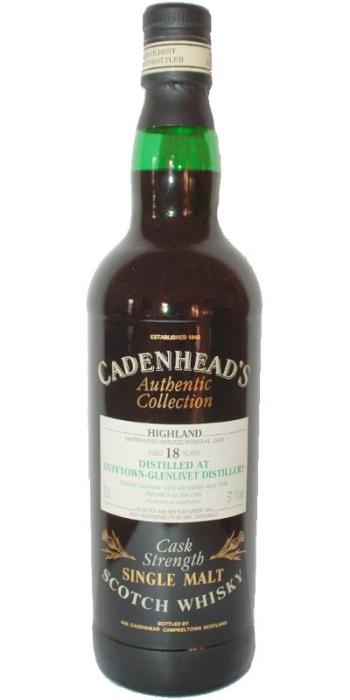 Sniff:
Big spicy sherry with dried orange and clove. Massive on the nose with lots of fruits and lots of spices. Very different than younger/modern sherried whiskies. Luckily it’s not just that and there’s also barley and oak.

Sip:
The palate continues, but also adds a bit of feinty notes with shoe polish, leather and a whiff of paint stripper. It’s quite strong, and very warming, with dried orange again, and sour cherries. Clove, nutmeg and a hint of ginger.

Swallow:
The finish is very long and eventually goes into a very nice and warming boozy Christmas cake, even if it is blasphemy to say something like that. There’s just lots of baking spices, and lots of dried fruits. Especially the orange and clove linger and that’s gorgeous.

This is a style of sherry that no longer exists. Maybe it’s one of those paxerette casks, but I doubt we’re ever going to find out. The dried orange and clove style is something utterly gorgeous and increasingly rare. The last time I had it (that I remember) was with a late-eighties Macallan. That’s eight years ago.

I'm very interested in booze, with a focus on whisky. I like to listen to loads of music and play lots of Magic: the Gathering, and board games too. I'm married to Anneke, have two daughters Ot and Cato, a son Moos and a cat called Kikker (which means Frog, in Dutch). I live in Krommenie, The Netherlands.
View all posts by Sjoerd de Haan-Kramer →
This entry was posted in Dufftown and tagged 1979, Authentic Collection, Cadenhead, Dufftown, Sherry Cask, Speyside. Bookmark the permalink.