My favourite events of 2013

Looking back at the almost gone year I remember quite a lot of whisky events. Not as many as some years ago when I visited so many festivals I couldn’t even remember them all, but the quality of each individual event has gone up I think.

I visited some festivals (Hielander, Limburg and Maltstock) and some tastings. Also, during our family holiday in Scotland we visited some distilleries. All in all, that makes for a great year in booze!

My favourite festival is, of course, Maltstock. It was another great year of whisk(e)y and friends. Some nice tastings with the surprise tasting by Hans Offringa on Woodinville and innovation in Bourbon really standing out. Unlike last year in which I took extensive notes of everything, I barely remember which drams we had sitting outside and yapping whisky-geek-jargon with people from all across Europe.

Most of the whisky tastings I visited this year were at De Whiskykoning in Den Bosch, with the first one for 2014 already planned. There were several themes of course, Winter (Islay), Spring (Lowlands), Autumn (Highlands and Campbeltown), the surprise tasting with the 12 whiskies to preselect from for Christmas and others.

The favourite of the bunch was the surprise tasting. Not necessarily because there was a LOT of whisky involved (12 drams in under 3 hours) but also because of some real stunners: Balvenie Tun 1401 #8, Glenmorangie Ealanta, a reprise of Auchentoshan’s Solera.

During our holiday in Scotland we did no less than 4 distillery tours, which is quite something if you’re travelling with a 8 month old kid. Apart from tours we visited 6 other distilleries too of which I remember Glen Moray most fondly since they allowed us to wander around as long as we stayed out of the way. I’m not counting my stroll around Brora Distillery, although it was something to remember too.

The tours we did were BenRiach, Talisker, Glenmorangie and Balblair. BenRiach was my favourite for several reasons:

In the warehouse we tasted some great drams with a BenRiach 1975 from a refill butt leading the charge. Other than that the tour was extensive with no subject left untouched. Ronnie’s knowledge of whisky making is impressive.

Talisker had a pretty nice tasting too after the tour, with the guide being very knowledgable too. Something I didn’t expect after earlier experiences with Diageo’s tour guides (more often than not some hired hand who knows shit outside the regular story). 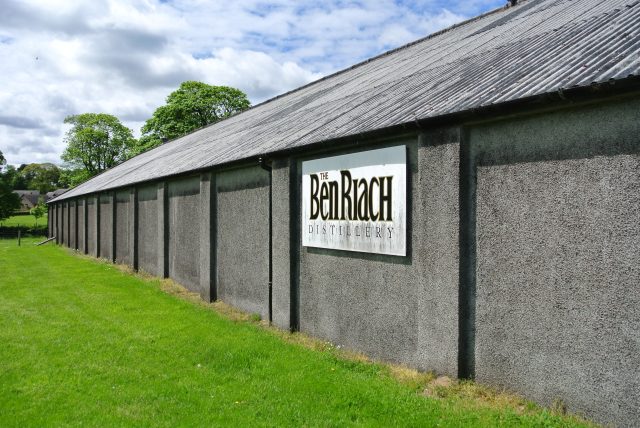 BenRiach’s back entrance (from Longmorn)

I'm very interested in booze, with a focus on whisky. I like to listen to loads of music and play lots of Magic: the Gathering, and board games too. I'm married to Anneke, have two daughters Ot and Cato, a son Moos and a cat called Kikker (which means Frog, in Dutch). I live in Krommenie, The Netherlands.
View all posts by Sjoerd de Haan-Kramer →
This entry was posted in - Distillery, - Festival, Auchentoshan, Balblair, Balvenie, BenRiach, Brora, Glen Moray, Glenmorangie, Talisker and tagged Alkmaar, Hans Offringa, Hielander, Highlands, Limburg, Lowlands, Maltstock, Scotland, Skye, Speyside, Whiskyfair, Woodinville. Bookmark the permalink.

2 Responses to My favourite events of 2013