This Glen Moray from the ‘rare vintage collection’ was all the rage last year. It was suddenly available everywhere, and the distillery didn’t put all that much in marketing of it. Nonetheless it seems to be on everyone’s radar all of a sudden.

I tried it last February at the Hielander Whisky Festival, again from a sample sent to me by the guy who let me try it there and again last Friday at a whisky tasting at Whiskykoning. So by now I should have a review ready, right?

The first time I tried it it was about halfway through the festival, which means I had already had a couple of drams, mostly at cask strength so the 43% Glen Moray was a bit ill timed. Still, I found it gentle and tasty, with a port influence that didn’t overpower the whisky.

I went to Glen Moray a couple of years back but we only stopped there for a walk around the premises and no tour, plus a visit to the distillery shop at which they had some sent back bottles of the 30 year old which were discounted from £ 180 to £ 70. Seventy quid for the official thirty year old whisky. Now THAT was a deal. Of course, I still have to open it.

Anyway, the distillery is lovely and the current owners are trying to get a more significant market share with it, which has never happened before since it always was blending fodder. 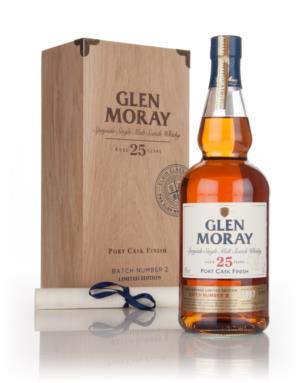 Sniff:
At 43% I expected a very gentle whisky but it has a bit more punch than that. It’s slightly musty with old wood, and some earthy scents. Red fruits, tea, malt and some tropical fruit. Mango, papaya and pineapple.

Sip:
The palate has a LOT of oak and a lot of fruit, both tropical and red fruits. Spicy with a hint of pepper and hints of port.

Swallow:
The finish is quite short and therefore slightly harder to pin down. It’s not packing a lot of flavor but has that slightly spicy pepper flavor again, but the fruit is toned down.

This is a whisky with two faces. It’s dangerously drinkable and I can imagine running through a bottle of this in no time. When just ‘drinking’ it instead of tasting it, it’s a gorgeous dram that goes down easily. When assessing it, like I did now, it’s a tad more interesting, but also slightly weird.

The fruitiness you generally get from Port is not really there. You get some red fruits but I was mostly surprised by the tropical fruits. The oak is huge but that’s to be expected if this was a fresh port cask, which is to be expected.

All in all, this is a lovely dram. It ticks the boxes you want ticked, but for some reason I expect this to be drank more like a € 50 bottle since it’s so easily drinkable. If you can show restraint and sit down to properly enjoy a whisky like this, it’s highly recommended.

Thanks to Dennis for the sample, and to Rob Stevens to have it in the tasting.

I'm very interested in booze, with a focus on whisky. I like to listen to loads of music and play lots of Magic: the Gathering, and board games too. I'm married to Anneke, have two daughters Ot and Cato, a son Moos and a cat called Kikker (which means Frog, in Dutch). I live in Krommenie, The Netherlands.
View all posts by Sjoerd de Haan-Kramer →
This entry was posted in Glen Moray and tagged 1987, Elgin, Glen Moray, Port Cask, Speyside, Whisky tasting, Whiskykoning. Bookmark the permalink.