I really love old Macduff. I love old Macduff from bourbon casks even more. I’ve tried a couple of them over the years and all of them have been incredibly good. Subtle fruit and malt and oak matured to near perfection.

This one I tasted blind, as the last two reviews. In this case the sample also came from whisky buddy MZ. As I said before, I should taste more whiskies blind and buy based on that instead of a tasting with which I already have a prejudice about the booze.

Macduff is a bit of a fun one. Mostly because almost everything that’s been bottled from the distillery is either from around 1980, or 2000. From in between those years there most likely are bottles around, but the ones that get recognition and fame are from around those two vintages. 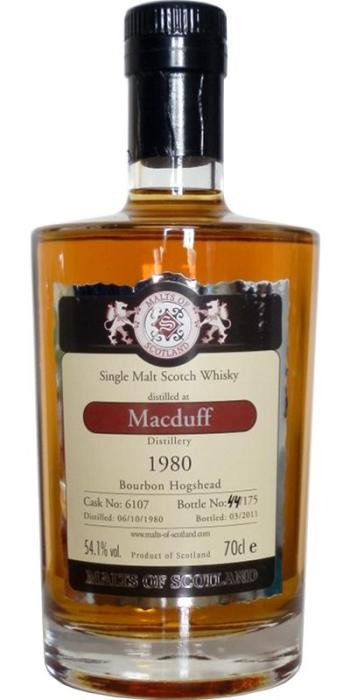 Sip:
Lightly bitter still, but less so than on the nose. Gentle with oak and pepper. Some hints of caramel too. Soft, ripe pear and some lychee. The caramel becomes stronger as you drink it.

This whisky probably is not a favorite for every one. There are some demanding flavors and the bitterness on the nose is not something that’ll make many friends upon a first try. I think a whisky like this won’t do very well at a festival with too many easier drams surrounding it.

However, when you sit down for it, as I happened to do, it’s really rewarding. There’s a lot of discover and it goes slightly off the beaten track. The fruits, with the green malt and foresty flavors combine very well and make for a consistent, delicious experience.

When I tried it I thought it was a Glen Elgin, since they can also have this green flavor going on, but I was wrong about that. In the blind tasting competition I would at least have gotten some points for the region.

Apparently, when I read reviews of this by others (at Whiskybase for example) they got a lot more fruits from it than I did. Not sure what’s happening there, but I didn’t really get the papaya, mango and melon thing. That does not mean I like it less, though!

I'm very interested in booze, with a focus on whisky. I like to listen to loads of music and play lots of Magic: the Gathering, and board games too. I'm married to Anneke, have two daughters Ot and Cato, a son Moos and a cat called Kikker (which means Frog, in Dutch). I live in Krommenie, The Netherlands.
View all posts by Sjoerd de Haan-Kramer →
This entry was posted in Macduff and tagged 1980, Bourbon Cask, Macduff, Malts of Scotland, Speyside. Bookmark the permalink.