After yesterday’s disappointing score (zero points, obviously) I was hoping for a bit of points to get away from the bottom of the list again. Well, that didn’t work out at all.

Like last year there’s one of those weird Loch Lomond drams in the competition that I had never heard of until last night. I was scoring no points then, and I am not scoring anything now. I was way off on everything, including the ABV.

Also like last year, the whisky tasted much older than it actually is, and a lot more intense than the 45% it actually has. So, there is some consistency in the distillery, or so it seems. This makes me (try to) make a mental note to get to know the Loch Lomond products a little bit better. 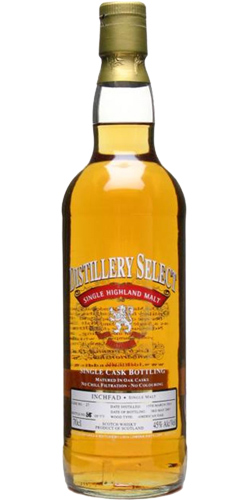 Sniff:
Some brine and salt, slightly oily, but also a ‘scent’ of water. Not necessarily watery, but the scent of running water. There’s grain as well, and it really makes me think of those newish unpeated Bruichladdichs. Old fashioned, with a hint of olive oil and bread.

Sip:
The palate is slightly drying with lots of flavor. On the palate it’s slightly thin with grain and salt. It builds up to more intensity after a while. Bread again and that oily feel is present here too.

Swallow:
The finish is light and full. Salty, briny and long.

I went for a 12 year old Bruichladdich at little over 55%. I filled this in after the dram of the day before since I was at our company’s Christmas party last night (drinking too much beer). I didn’t feel the need to revise my opinion, but that pushed me further to the bottom of the ranking.

Unfortunately, I think nobody got many points this time. I think most people in the competition had never heard of the brand “Inchfad”. According to Whiskybase this bottle used to go for € 33, which more or less makes this the best value for money whisky that was around in those days.

I really loved this dram, and at just over three tenners I wish it were still available. A while ago I reviewed a Glen Scotia and thought I needed to get that distillery’s products better. Loch Lomond has just been added to that list!

I'm very interested in booze, with a focus on whisky. I like to listen to loads of music and play lots of Magic: the Gathering, and board games too. I'm married to Anneke, have two daughters Ot and Cato, a son Moos and a cat called Kikker (which means Frog, in Dutch). I live in Krommenie, The Netherlands.
View all posts by Sjoerd de Haan-Kramer →
This entry was posted in Loch Lomond and tagged 2001, Blind Tasting Competition, Bourbon Cask, Highlands, Inchfad, Loch Lomond, Single Cask, Usquebaugh Society. Bookmark the permalink.