Yesterday I actually scored some points, but since almost everyone scored points I actually went down in ranking. Today I was certain I would score some points as I was quite certain about my guess.

Of course, things turned out differently, and I only got some points for the randomly guessed ABV. This turned out to be an Edradour. Surprisingly, since I liked the whisky. That has never happened before with an Edradour, as far as I can remember.

This bottling was done for Luxemburg’s biggest whisky shop in Wemperhardt called Vinothek Massen. I’ve been to Luxemburg quite often in the past, but not in the last decade since I love whisky. Therefore I’ve not been to that shop yet, but it’s on the to do list for sometime. 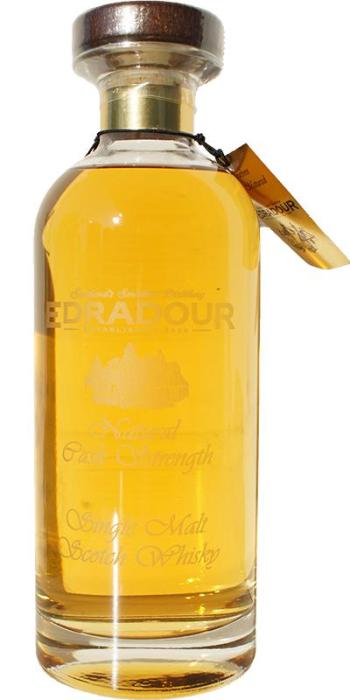 Sniff:
Salt is the first scent I get, with quite some oak. Rather spicy with a gentle whiff of smoke. I can’t really figure out which kind of cask this is. Lots of caramel and I even get menthol after a while.

Sip:
It’s pretty sharp with lots of black pepper and chili pepper. Lots of oak and salt too. Some dried fruits with raisins.

Swallow:
The finish is very dry with oak and pepper. Not overly long.

The whiff of smoke, with the peppery heat and salt made me go west coast. I was in doubt for a while between Talisker and Longrow, but I found the smoke not heavy enough in the end and went for a Springbank.

The dried fruits on the palate made me think of a sherry cask, although that was the only tell for that, and the rest of the flavors could be anything. So, I went for an 18 year old Springbank in the end. I felt the wood influence to be quite pronounced so hence the 18 years.

Anyway, I really liked this whisky. I was very, very surprised this was an Edradour since I can’t really match the flavors with the profile for that distillery. I didn’t get any of the regular cheese I normally associate with Edradour. Another good whisky in the competition. It seems Ewald was on a roll for this year’s line-up!

I'm very interested in booze, with a focus on whisky. I like to listen to loads of music and play lots of Magic: the Gathering, and board games too. I'm married to Anneke, have two daughters Ot and Cato, a son Moos and a cat called Kikker (which means Frog, in Dutch). I live in Krommenie, The Netherlands.
View all posts by Sjoerd de Haan-Kramer →
This entry was posted in Edradour and tagged 2003, Blind Tasting Competition, Bourbon Cask, Edradour, Highlands, Pitlochry, Usquebaugh Society, Vinothek Massen. Bookmark the permalink.