For the seventh time Glenmorangie releases their annual Private Edition series. So far there have been hits and misses, and for me some unknown. The biggest success in the range was the Ealanta, I think. The Virgin Oak matured whisky was a rather pure dram and showcased the quality of the oak tremendously.

I’ve not tried the Companta and the Tusail, although I have a bottle of that second one. The one I liked least was the first one, the Sonnalta. That sherry influence didn’t do it for me, but it’s been so long I can’t really say why that was.

The Finealta and Artein were interesting, but forgettable. According to Glenmorangie’s USA website the Astar is part of the Private Editions as well and would make for an eighth (and tremendous) dram. So the summary is, it seems, that I like Glenmorangie best from American Oak that had either bourbon, or nothing in it before. 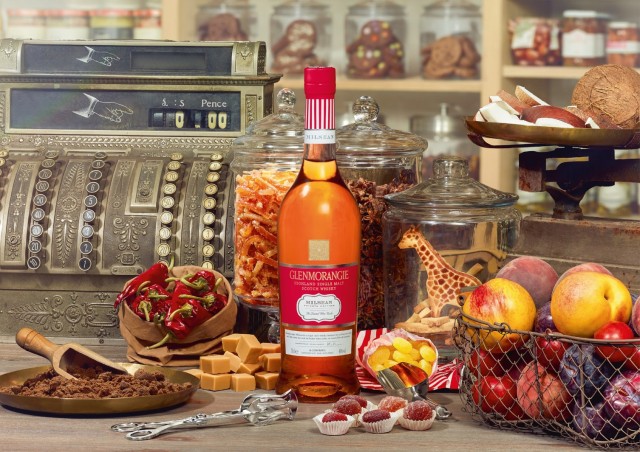 Let’s see where the Milsean ends up. Milsean means ‘sweet things’ and the whisky has been matured in bourbon cask and then ‘rematured’ (read: finished) in Portuguese wine casks. Could be interesting. The bourbon cask start should help, according to previous experiences.

Sniff:
Light, with lots of malt and candy sweetness. A touch of mint as well as hard sugar candies. A whiff of alcohol and more cereal notes as it opens up. Quite fresh and light, which I didn’t expect from something promised to deliver lots of sweetness. A hint of licorice, and chalk too. A tiny note of vanilla in the background.

Going back after ten minutes or so there’s a huge note of caramel fudge that’s developed.

Sip:
The arrival is very smooth and gentle. It does pick up some peppery hints, and those of red cinnamon after a few seconds. A lot of sugary sweetness coats your mouth. Marshmallows, malt, and again a fresh touch of mint.

Swallow:
The finish is very sweet again, but also has enough other flavors to be interesting. Pepper and cinnamon, mint, malt, sugar candy. Quite long. Not much oak to be detected.

To be honest, this whisky is a lot more interesting than I expected it to be after the initial press release. The wine notes are hard to detect and show themselves more in the form of additional sweetness and a different touch of candy like flavors than as more traditional wine notes. I think this is a good thing.

The cinnamon and mint notes make this quite an easy drinker but with enough flavor to be interesting for a while. It is quite a modern whisky which was created with a certain flavor profile in mind. An engineered whisky, so to say. Not that that is a bad thing per se.

The biggest drawback this whisky has is the price. In The Netherlands it’s available for some € 120 and that, I think, is far too much for this whisky. The UK is a tad lower at around € 95, and that’s a far more ‘correct’ price (not just because I’m stingy).

So, summarizing. A good and interesting whisky, but a bit too expensive locally. But I’ll gladly finish my sample!

I'm very interested in booze, with a focus on whisky. I like to listen to loads of music and play lots of Magic: the Gathering, and board games too. I'm married to Anneke, have two daughters Ot and Cato, a son Moos and a cat called Kikker (which means Frog, in Dutch). I live in Krommenie, The Netherlands.
View all posts by Sjoerd de Haan-Kramer →
This entry was posted in Glenmorangie and tagged Free Sample, Glenmorangie, Highlands, Milsean, NAS, Private Edition, Wine cask. Bookmark the permalink.