This Irish whiskey came out last year in spring and it was released on the back of a lot of ridiculously popular bottlings from other independent parties. Those whiskeys were more expensive and often twice as old as this one, but that didn’t stop me form buying this bottle.

What also didn’t stop me was that this one was quite pricey compared to other, similarly aged bottles from, for example, The Nectar of the Daily Dram. Blackadder bottlings came at the same price as this, but somehow I’m not often enthused by Blackadder these days.

Anyway, what surprised me when I got home was that this whiskey was anything but clear. There was a very distinct cloudiness to it that was very surprising and not something I’ve seen before in any whisk(e)y that I can remember. Not like this at least.

I asked David Stirk what this could be, or what could cause it, but he didn’t have a clue either. But, after all, it’s the taste of it that matters, right? 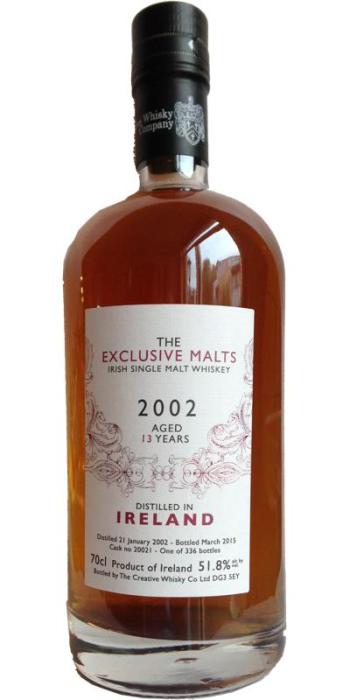 Sniff:
Very light with lots of malt. Even some rye-like spiciness. But, mostly very light. Slightly fruity but nothing exotic. Some grapes and apples. Slightly chemical with wine
gums and artificial sweetener. Plastic bags. Green malt. Some freshly cracked black pepper in the background. Some mulchy oak too.

Sip:
Some vanilla on the arrival but quickly replaced with lots of strange, chemically sweet things. Winegums, the plastic bags they come in, artificial sweetener. Quite sharp with
the black pepper coming back with some chili backup. Mulchy oak again. Strangely sweet. Not sure what to think of this.

Swallow:
The finish ramps up the chemical bits more. Very, very sweet with all the fruit being replaced by similarly coloured winegums. Some oak, some pepper. It mellows quickly but lasts long.

This is a strange one. It doesn’t stand a chance compared to the other similarly aged releases from last year. The ones from Daily Dram and such. It’s just weird with the immense and chemical sweetness that’s overpowering everything else. I have no idea what’s going on with this whiskey, and it sure is something unique.

So, unique: yes. Tasty: not to me. I really didn’t like this one. The sweetness is ridiculous and not balanced out by anything, and on top of that it’s a very chemical kind of sweetness too. I did sort of enjoy this in the beginning, but as I go further down the rabbit hole, it’s not getting better.

Still available for around € 90

I'm very interested in booze, with a focus on whisky. I like to listen to loads of music and play lots of Magic: the Gathering, and board games too. I'm married to Anneke, have two daughters Ot and Cato, a son Moos and a cat called Kikker (which means Frog, in Dutch). I live in Krommenie, The Netherlands.
View all posts by Sjoerd de Haan-Kramer →
This entry was posted in - Irish Whiskey, Undisclosed and tagged 2002, Cask Strength, Creative Whisky Company, David Stirk, Ireland, Irish Whiskey. Bookmark the permalink.