Another bottler that somehow is not on my radar. Which is a silly thing since most of what Martin Armstrong (the son of the former Bladnoch distillery owner) releases is at least decent in quality, and the bottles are quite cheap, normally. This 14 year old Springbank was only £ 45 when it came out, for example.

I also know that Whiskybase’s recent Invergordon 1972 came from there, and that was a very, very interesting bottle of hooch! The same goes for the new release from WhiskyNerds, by the way.

I tried this one more or less at the same time as the three releases from Whiskybase so it certainly had some competition! This one was drawn from a fresh bourbon barrel, so that steered expectations towards more cask influence and more vanilla for a bit. 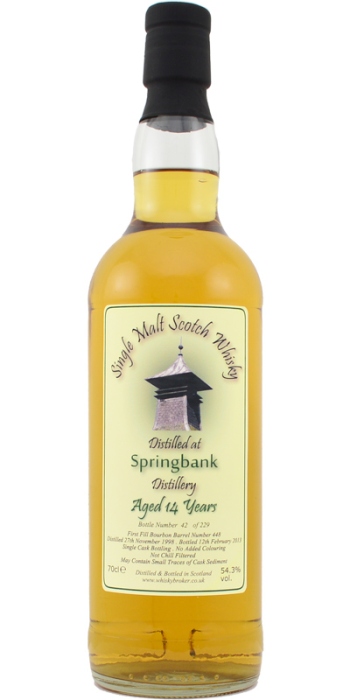 Sniff:
The rough spirit is clearly present, but there’s also quite some oak. A clean kind of alcohol, albeit a bit unrefined. Slightly sweet with good balance, some scents of resin. The oak is present, but doesn’t overdo it. Nicely balanced.

Sip:
The palate is tingling with lots of alcohol. Oak, spirit, a whiff of smoke and barley. Malty with flavors of apple and a lot of ‘Springbankness’.

Swallow:
The finish is light, and focuses heavily on the spirit again. Oak, apple, straw and that trace of smoke is back too. Quite malty as well.

This is a quite typical Springbank. Luckily the cask hadn’t taken over yet, which sometimes happens with fresh bourbon barrels. I didn’t pick up on any vanilla, luckily. The spirit is quite rough and unexpectedly present after 14 years in oak. The rest of the nose, palate and finish doesn’t do anything unexpected.

However, what it does, it does quite well. The whiff of smoke works with the lightly fruity and malty whisky. Rather classic and typical for Springbank. Especially at only 45 quid, this is a cracking dram.

I'm very interested in booze, with a focus on whisky. I like to listen to loads of music and play lots of Magic: the Gathering, and board games too. I'm married to Anneke, have two daughters Ot and Cato, a son Moos and a cat called Kikker (which means Frog, in Dutch). I live in Krommenie, The Netherlands.
View all posts by Sjoerd de Haan-Kramer →
This entry was posted in Springbank and tagged 1998, Bourbon Cask, Campbeltown, Martin Armstrong, Springbank, Whiskybroker. Bookmark the permalink.