In the very first bottle share I ever did, which was a Gordon & MacPhail themed one, I had a bottle of 30 year old Strathisla, at 43%. Since that was about six years ago that still was distilled a decade after this one.

Gordon & MacPhail sent me this one for their ‘The Wood makes the Whisky’ campaign, and as usual I am quite late to the party with everybody having reviewed this already. I don’t think that matters much, and I wanted to wait for a moment in which I had the peace and quiet to properly sit down with/for this dram.

A quick calculation gives us the result of this being at least 47 years old. That is properly ancient, by anyone’s standards (when it comes to whisky that is). I doubt many Strathislas from that era were laid down in bourbon casks, so this probably sat its entire life in proper, old sherry casks. It does explain the colour, of course.

Getting back to that first bottle share. From the top of my head there also was a 50 year old Glen Grant (costing only € 200 at the time…), a 33 year old St. Magdalene and a lot of others, of which a lot were really good. Looking back at the post, I think I did a nice assessment of the whiskies and that 30 year old Strathisla ended in the upper part of the list. I really like the profile of those slightly dirty, oak heavy, sherried Speysiders. And old Strathisla does that very, very well. 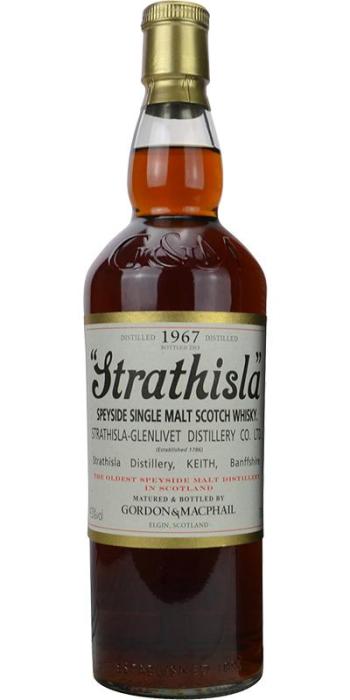 Sniff:
The nose is heavier and more intense than you normally expect from a 47 year old, 43% whisky. It’s quite dirty and earthy with dead leaves on a forest floor, cigars and tobacco. There’s a lot of oak and some pickled fruits. Strangely there is a whiff of a mezcal like smokiness, which only adds to the dirtiness of the whisky. Some minerals and a tad acidic.

Sip:
The palate betrays the lower ABV by being quite smooth. It does not relent on the side of intensity, weight and richness. That mezcal smokiness of minerals, and maybe a whiff of diesel, is back again as well. Lots and lots of oak, dead leaves and some black pepper. A bit oily on the tongue.

Swallow:
The finish is quite unrelenting on the oak front. Lots and lots of wood, on a very ‘Armagnac’ like manner. Even slightly overpowering, but very likable too. The finish is really long and that whiff of smoke lingers loooong.

This, dear reader, is insanely good. It does everything I expected of an old Strathisla, and more. The mezcal-esque smokiness is an true addition to the whisky and it makes it far more interesting that I had dared to hope. The light acidity cuts the weight of the whisky a bit which also makes the almost overpowering oakiness a lot more bearable.

To be honest, everything about this is awesome. I wonder how this would have tasted at cask strength, and I know I’m going to be on the lookout for stuff like this in auctions. Hoping against hope that it’s a bit more affordable there, since this one clocks in at € 700 a pop.

I am considering a bottle share of this bottle, which is probably not going to work out at € 100 per 10cl share…

Thanks to G&M for sending the sample. Much, much obliged!

I'm very interested in booze, with a focus on whisky. I like to listen to loads of music and play lots of Magic: the Gathering, and board games too. I'm married to Anneke, have two daughters Ot and Cato, a son Moos and a cat called Kikker (which means Frog, in Dutch). I live in Krommenie, The Netherlands.
View all posts by Sjoerd de Haan-Kramer →
This entry was posted in Strathisla and tagged 1967, Free Sample, Gordon & MacPhail, Keith, Retro Labels, Sherry Cask, Speyside, Strathisla. Bookmark the permalink.