I kind of smuggled a bit of July into the last post, because our family holiday was overlapping between June and this month.

Also, it was done to get the shit beers of France out of the way, and the prospect of July was to try quite a lot of new things in various situations. July saw two weekends away with the family and friends, and an order from Brewdog to get my hands on their specials that aren’t normally available in The Netherlands.

All in all, even though there weren’t even 20 days in July that I hadn’t posted on yet, I got to 32 unique beers that were not listed before. That’s quite insane, but I think I can get away by blaming my friend Joost. Not sure how or why, but it feels right. 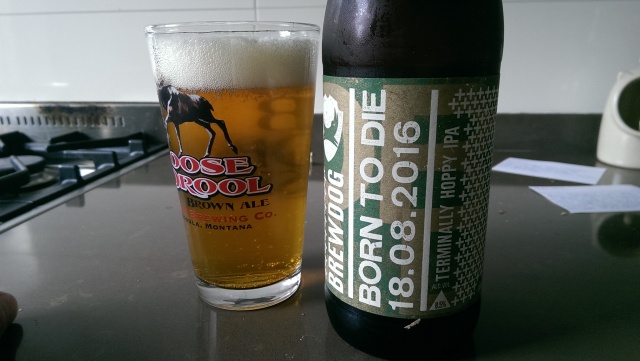 Lager, and hideous and/or pointless stuff

Vast amounts of beer, with quite a few new ones lined up for August. I keep telling myself I’ll drink (or at least buy) less in the coming months, but somehow it doesn’t seem to happen.

Beer of the month is a tough choice between Stone’s Pataskala Red X IPA and the Redwood 2015 by The Wild Beer Co. So, I decide a tie is possible too.

I'm very interested in booze, with a focus on whisky. I like to listen to loads of music and play lots of Magic: the Gathering, and board games too. I'm married to Anneke, have two daughters Ot and Cato, a son Moos and a cat called Kikker (which means Frog, in Dutch). I live in Krommenie, The Netherlands.
View all posts by Sjoerd de Haan-Kramer →
This entry was posted in - Beer and tagged Albert Heijn, Amstel, Beavertown, Belgo Sapiens, Brand, Brewdog, Brothers Drinks Co., De Bradandere, Einstock Olgerd, Magic Rock, Marble Beers, Ninkasi Srl, Oedipus, Pohjala, Stone Brewing, Van Steenberge, Van Viven, Vissenberg, Wild Beer Co.. Bookmark the permalink.

2 Responses to Beers of July