A properly ancient whisky that I picked up for a bottle-share. Which, somehow, never filled up, so I had to drink it myself. Bummer.

It seems that most bottle-shares I do with those pricier, older whiskies never fill up. That’s annoying, sometimes, but in some cases it’s not too bad either. It’s more costly, but it also means I get to drink more awesome stuff myself.

This one, by now, is nearing its end and it won’t survive the coming weekend. I shared it with buddies during the Blog Birthday Bash last Saturday, and they were kind enough to leave me a heel to end on my own.

So, Tamnavulin then. A whisky that’s normally considered to be far from interesting and goes into blends for the vast majority of its production. There’s probably a lot in Whyte & Mackay, since they own the place. The distillery was closed between 1993 and 2007. 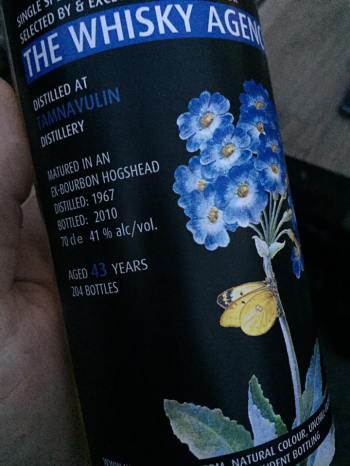 Sniff:
On the nose it starts with some oak. Not too much, but it’s there. A rich maltiness follows with a hint of vanilla. Barley and some chaff, but also dried apple and a slight toastiness. Candied lemon and bread too.

Sip:
The palate is slightly thin, even though it’s bottled at cask strength. Quite a lot of oak, with dry barley and a whiff of spicy, dry rub for barbecue meat. Toasted oak, barley husks and soft fruit. Stewed apples or so.

Swallow:
The finish is fairly predictable after the palate and doesn’t surprise me at any point. Slightly richer than the palate, and a bit more sweet too.

It’s not an easy whisky to rate. On one hand it’s pretty well made and shows some nice, classical flavors. But, on the other hand, it’s really boring and doesn’t surprise or wow me at all. The 43 years are not really noticeable, so paying extra for the age is not value for money either. Quite a bummer, even though the whisky is not bad.

Technically, I try not to taste the price tag of a whisky, but in the end I want to know if a whisky is worth the money and effort. While this is a good dram, well made, no gimmicks, it’s not worth € 250, which is what it used to cost.

I'm very interested in booze, with a focus on whisky. I like to listen to loads of music and play lots of Magic: the Gathering, and board games too. I'm married to Anneke, have two daughters Ot and Cato, a son Moos and a cat called Kikker (which means Frog, in Dutch). I live in Krommenie, The Netherlands.
View all posts by Sjoerd de Haan-Kramer →
This entry was posted in Tamnavulin and tagged 1967, Bottle Share, Bourbon Cask, Tamnavulin, The Whisky Agency. Bookmark the permalink.