Before let’s say, 2014 or so, Imperial wasn’t on many people’s radar. They were a closed distillery but not one that had gotten a cult status, unlike Rosebank for example.

For me that changed during the Blind Tasting Competition on Christmas Eve of 2014 when that year’s competition closed out with that one. I was glad to order one right away since that awesome bottling suddenly sold out overnight. Much to the surprise of unsuspecting suppliers who had it on their shelves for months without anyone being overly interested in it.

Since then I have the feeling that everybody is trying to get their piece of the pie, and the bottlings have grown quite rampant. This one, from The Whisky Exchange, came in a while ago for reviewing. 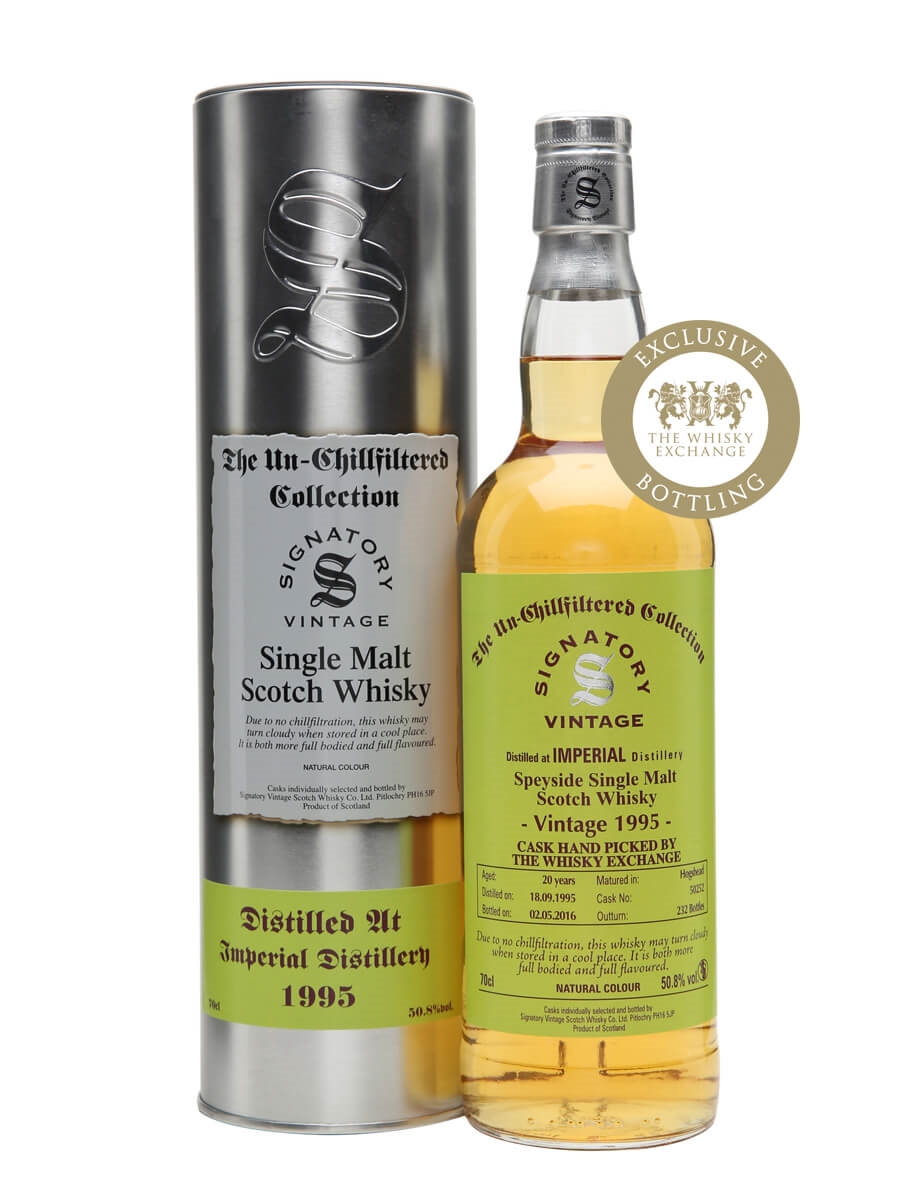 Sniff:
The nose is sharp and malty with lots of barley. A minor whiff of peanuts, and white pepper. Some oak but not as much as almost 21 years generally smells like. The typical white wine (Chardonnay?) sweetness and crispness that Imperial often has.

Sip:
The palate is sharp, with a bit of alcohol. Quite a lot of white pepper and chili pepper. Fresh, dry oak and again that sweetness of white wine. Some vanilla, but not a lot.

Swallow:
The finish still has a bit of that sharpness, but is also warming. Grains, barley, grist and hints of pepper. Not overly long, but rather nice.

This one is very consistent with what I know and have come to expect from single cask Imperials. It’s got a lot of grainy hints, but also the hints of oak aged whitewine with a hint of vanilla sweetness. I like those flavors, so I think this is a good thing.

Also, since this one sits at 70 pounds at The Whisky Exchange, it’s priced quite acceptably. Especially now the morons in the UK voted for Brexit and the exchange rate has suddenly become much more viable.

Sample provided by The Whisky Exchange, much obliged, guys!

I'm very interested in booze, with a focus on whisky. I like to listen to loads of music and play lots of Magic: the Gathering, and board games too. I'm married to Anneke, have two daughters Ot and Cato, a son Moos and a cat called Kikker (which means Frog, in Dutch). I live in Krommenie, The Netherlands.
View all posts by Sjoerd de Haan-Kramer →
This entry was posted in Imperial and tagged 1995, Cask Strength, Closed Distillery, Free Sample, Imperial, Signatory, Speyside, The Whisky Exchange. Bookmark the permalink.