A while ago I took the train to Den Bosch for a whisky tasting there, and with the other two guys I was on that train we decided to have a dram underway. This was interesting since it was rush hour and it was properly crammed. Luckily we could get on the train before it got really crowded and we could sit.

I brought this 25 year old Caol Ila from Cadenhead’s of which I picked up a sample in the months before then. About two centiliters were held back for reviewing from home, which is what I did during another part of the weekend.

Caol Ila is in a bit of a strange spot at the moment. Their older bottlings are awesome, especially when from the eighties. The official 25 year old is quite bland for such an old whisky from such an interesting distillery. Luckily, regarding those much older whiskies, Caol Ila is a relatively affordable whisky to buy. Compared to many other distillery’s outputs, the 198x bottlings go for a lot less than, let’s say, Bowmore. 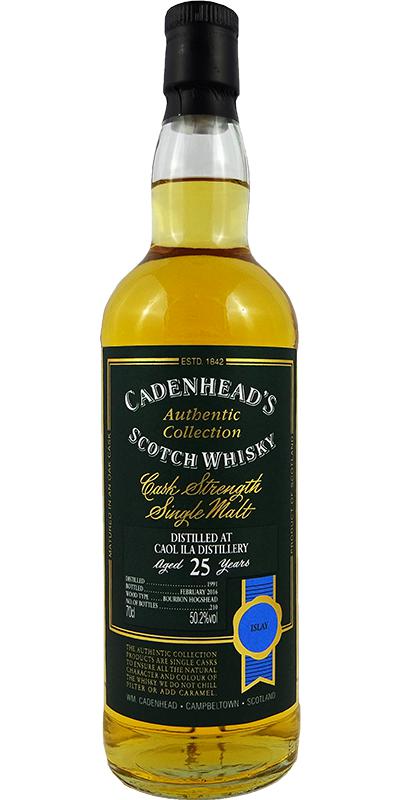 Sniff:
There’s a really thick, heavy smoke on the nose. But also some oily, creamy scents like olive oil and whipped cream. A bit of engine grease comes after, as well as a bit of a machine-like, diesel-y smoke. Straw and hay with some herbs. White grapes and rotten leaves.

Sip:
At first the whisky is quite smooth. It sharpens quickly with hints of oak and spices. Also quite dry and light with notes of barley and smoke. White grapes, rotten leaves and forest soil.

Swallow:
The finish is a bit more default for Caol Ila with some oak, smoke and that oily/creamy thing happening again. Quite long and dry.

Strangely, I did not like this whisky. While all the markers are there to make for a great dram, not unlike the Caol Ila that ended the ‘winter tasting’ in Den Bosch that night, with the Mezcal like smokiness. However, in this case the kind of oiliness, and the kind of creaminess just didn’t work for me.

Also, there are so many flavors in this dram that it started to feel a bit cluttered. A bit inconsistent. The crisp fruitiness with the heavy forest soil, for example. It just didn’t work.

So, while the tasting notes would make me want this dram, the general feel I have after drinking it says I don’t.

I'm very interested in booze, with a focus on whisky. I like to listen to loads of music and play lots of Magic: the Gathering, and board games too. I'm married to Anneke, have two daughters Ot and Cato, a son Moos and a cat called Kikker (which means Frog, in Dutch). I live in Krommenie, The Netherlands.
View all posts by Sjoerd de Haan-Kramer →
This entry was posted in - News and Announcements, Caol Ila and tagged 1991, Bourbon Cask, Cadenhead's, Caol Ila, Cask Strength, Islay, Port Askaig. Bookmark the permalink.