A very good idea if you ask me, and I’m now getting rather enthusiastic about joining that. I am easy to enthuse…

Under his company’s flag Peter Bevis, who started the whole thing, released a triptych of Arran whiskies in 2012 and 2013. When dining at Wullie Macmorland’s last January we tried one of these Arrans and it turned out to be a very good one, at a very affordable price (as in, 60 bucks for a bottle of cask strength, sherry cask matured Arran at 15 years old).

When one of Peter Bevis’ Dutch friends started selling his bottles through Facebook I quickly did a bottle share with them and I got one of each of all three. One sherry puncheon and two bourbon hogsheads.

Sales through Facebook didn’t go very fast since information on these bottlings is very limited (not to say, there’s none at all) and the labels are riddled with typos. On the front it says ‘distilled in 1987’, almost a decade before Arran opened its doors. The back label has more random typographical errors (‘bottlred on…’, ‘colourd…’), and this made a lot of people mistrust the authenticity of the bottlings.

I (sort of) knew what I was getting into, so I bought them anyway. Especially since the guy who sold them is a known figure, as is Peter Bevis. And I doubt Wullie would allow fake whisky into his restaurant. 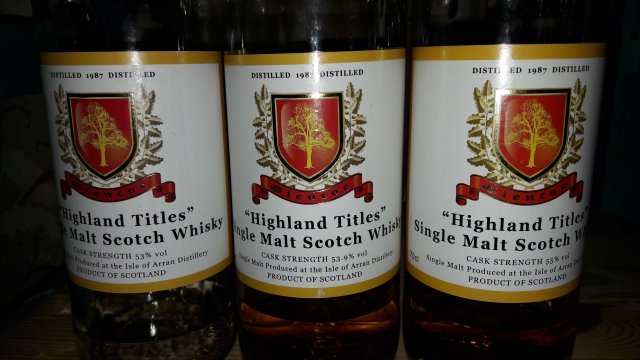 The nose of the sherry cask is fruity with a lot of barley in the background. Oak, with a more complex nose than I expected. Peach, apricot, and soft wood. The palate shows hints of crushed black pepper, dry oak and some chili heat. Apricot, peach and peach stones too. The finish is a bit lighter, with sweetness and bitterness nicely combined. Lots of oak ad peach stones.

The nose of this first Bourbon Hogshead is very classic. Slightly coastal with lots of barley and oak. Some oatmeal, straw and candied lemon. The palate is a bit on the sweet side with barley and vanilla custard. Slightly salty with hints of apple and iron. Ever so slightly bitter with apple seeds. Creamy with a sharp edge. The finish is more dry than expected, not very long but it ticks the boxes. Sweet and a hint of salt, with barley and oak.

This one is significantly sharper on the nose. Hints of straw with some vanilla and a lot of oak. Some putty, so there’s a weird note in there too. Not necessarily bad, but weird. Hazelnut, white almond, and baked apple. The palate is dry and sharper than I’d expect of 55%. Lots of fresh oak and nutty. Slightly bitter hints of apple, iron and brittle ears of barley. The finish brings back the sweet vanilla with some heat from the oak and alcohol. Dry oak, apple, iron.

As you’ve seen by the ‘Malt Marks’, I really liked the first two, and didn’t really care for the third one. I guess when tasted on its own, the third one might score a bit higher, but now it kind of falls flat against its brethren.

Still, at 60 euros a pop, all three are great deals and you get a lot of value for your money.

I'm very interested in booze, with a focus on whisky. I like to listen to loads of music and play lots of Magic: the Gathering, and board games too. I'm married to Anneke, have two daughters Ot and Cato, a son Moos and a cat called Kikker (which means Frog, in Dutch). I live in Krommenie, The Netherlands.
View all posts by Sjoerd de Haan-Kramer →
This entry was posted in Arran and tagged 1997, Arran, Bourbon Cask, Highland Titles, Islands, Isle of Arran, Peter Bevis, Sherry Cask. Bookmark the permalink.

1 Response to 3 Arrans by Highland Titles