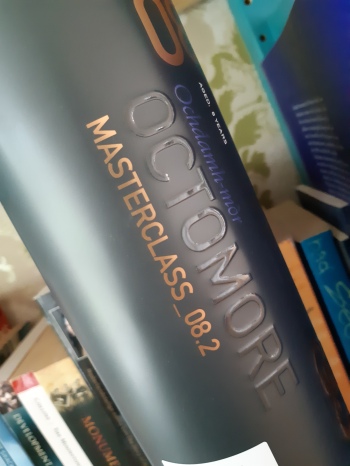 Slowly but surely slightly older Octomore are being released. In the case of Octomore it’s a bit weird since the age on the label will not entirely reflect a decent price point. Mostly because producing the whisky is ridiculously expensive. Peating barley to this level is painstakingly slow and costs significantly more than a regular peating level like it’s sister Port Charlotte has. Therefore, there never has been an official Octomore under 100 euros, and they are sometimes way more than that.

This is peated to a level of 167 parts per million of phenols in the barley. This means the level of peat smoke in the whisky is lower than that, but the exact level is unknown (this is also why a 15ppm An’Cnoc tastes really peaty, since that’s measured in the spirit.

This batch is an 08.2 batch, and so far all the x.2 batches have been matured in wine casks. This one is no exception with a mix of “Mourvedre, Sauternes, Sweet Wine, Amarone” has been used. I’m not sure what ‘Sweet Wine’ means in this case.

Sniff:
On the nose there’s a lot of dry peat with sweet red fruits. Typical scents for a wine cask matured whisky, with old wood and wet dirt. It’s very strong, but also quite predictable if you’ve had x.2’s before.

Sip:
Even though the ABV is high but not *that* high, it tastes a lot stronger on arrival. Razor sharp at first and it takes a while to mellow. Earthy with peat smoke and peat. Lots of oak and red fruits. Grapes, cherries. And very dry.

Swallow:
The finish isn’t much different than the palate. Of course it mellows a bit, but the flavors fade rather swiftly.

Well, Octomore is getting better with the years. It improves with a little bit more age to it. However, that also means that the peat in the spirit mellows, and it makes me wonder if this wouldn’t have been better as a ‘Port Charlotte’. It feels a bit strange to pay extra for the insane level of peat, and then again for prolongued aging.

Anyway, a rather good whisky, but not one that will change my opinion on Octomore (which is: too strong, too peaty). Having said that, the wine casks do add a nice layer of flavors to the whisky, and so far these wine casks have been my favorite Octomores.

I'm very interested in booze, with a focus on whisky. I like to listen to loads of music and play lots of Magic: the Gathering, and board games too. I'm married to Anneke, have two daughters Ot and Cato, a son Moos and a cat called Kikker (which means Frog, in Dutch). I live in Krommenie, The Netherlands.
View all posts by Sjoerd de Haan-Kramer →
This entry was posted in Bruichladdich, Octomore and tagged 2008, Bruichladdich, Cask Strength, Islay, Octomore, Wine cask. Bookmark the permalink.