It’s been two weeks since I posted. I knew it’d been a while, but I didn’t realize it was that long. In those two weeks I’ve barely had a moment to myself, didn’t write any notes and didn’t even properly sit down for a dram of whisky with some attention. At least not beyond recognizing ‘there’s been better’ or ‘this is rather good’.

What I did do is see a lot of family, work a lot, play some Magic if it was planned beforehand. The kids have gotten quite some attention from me with their mum being out and about quite a bit in these two weeks too.

But anyway, a whisky review. I know the WhiskyNerds are waiting for a different Caol Ila review, but I don’t want to drink a € 550 per bottle whisky without giving it my everything. Which means I’m paying attention to this one, but it’s slightly rushed.

Caol Ila from 2018’s Feis Ile. A whisky from Refill US Hogsheads and Rejuvenated EU Butts. So “random casks”. No information on prior contents but I guess it’s safe to go for some sherry and some bourbon. A 10 year old, which isn’t bad these days. Let’s get in. 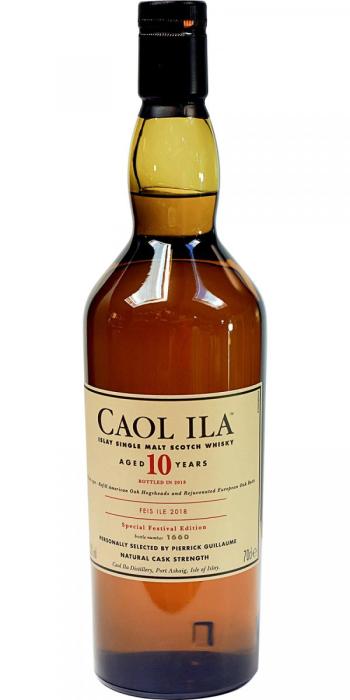 Sniff:
A mix of salinity, engine fumes, diesel, mezcal and peat smoke. It has a crisp fruitiness that reminds me of unripe pears and starfruit. Rather intense, but while there’s a lot of big flavors, it’s not overpowering. It’s quite appealing and rather gentle. The smoke is a combination of charcoal and diesel. Interesting.

Sip:
The palate is surprisingly sharp, but also very fruity. Starfruit, unripe Conference pears, granny smith apples. Even some white grapes. The smoke is hiding behind some oak. So, there’s oak, there’s smoke. Again, rather diesel-y, which makes it a bit mezcal like too. Smoked lemon, rather plant-like.

Swallow:
The finish is a bit richer, a bit more sweet. The fruit is still present, but the pears are more sweet, the grapes more like muscat grapes, the apples less granny-y. The smoke is a bit more like greasy soot, but not with any barbebcue flavors.

This is quite the whisky. There’s quite a lot happening and even though it’s only ten years old, it lost most of the youthful harshness already. The wood is not very present, but the distillate with the style of smoke that Caol Ila produces nowadays is something I like quite a lot!

I'm very interested in booze, with a focus on whisky. I like to listen to loads of music and play lots of Magic: the Gathering, and board games too. I'm married to Anneke, have two daughters Ot and Cato, a son Moos and a cat called Kikker (which means Frog, in Dutch). I live in Krommenie, The Netherlands.
View all posts by Sjoerd de Haan-Kramer →
This entry was posted in Caol Ila and tagged Bourbon Cask, Caol Ila, Feis Ile, Festival bottling, Islay, Sherry Cask. Bookmark the permalink.